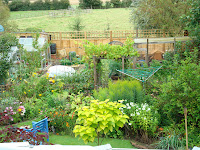 Yes taking the plunge in more ways than one, I have decided to set this blog up to record our adventure at the bottom of the garden.
For years and years long before I met my husband in fact I have memories from school days of wanting to live in the country grow fruit and vegetables and keep farm animals, but here was more to it than that, it wasn't just the food side it was all the other things that go along with day to living, I want to make our clothes and knit big woolly jumpers, stitch patch work quilts, bake bread make jams and preserves, I wanted us to do as much as we could for ourselves but still have a good comfortable life style.
I don't want to go back to living in a cave and having to make to and mend all the time, if we want to go out for a meal then still do so, I don't want to go back to horse and carts, I like my car, I still want us to have a television and a computer still want to have a phone and be in touch with the world, I want the best of both worlds I suppose.
We are getting there slowly although its not a race we are on a steep learning curve but the dream is becoming more of a reality every day.
To bring you up to speed, half of the garden has been turned over to fruit and vegetables a couple of greenhouse and a chicken run housing so far three chickens.
This time of year we are totally self sufficient in vegetables, which is great a lot of the time we have more than we can deal with and end up giving them away, although this year we have stopped the giving away process and now try to barter our surplus.
We also have four baby chicks three weeks old that we hatched out in an incubator, since day one we have said any males are for the table and the females we keep for eggs, we hope after these have moved outside to get some more eggs this time for table birds all of them.
We don't have issues with collecting road kill, Deer (venison) we have a lot of this in the freezer at the moment, we have the odd pigeon and squirrel in there that we have killed our self's and a big stock of crayfish, hubby has been getting from the local river, they are the American Signal Crayfish, for the past few weeks we have pulled the trap in as we were becoming a bit over run with them.
When we do go and buy meat we go to a local butchers who stocks locally produced free range meat, if we are going to eat it we want it to have lived a good life first.
so that covers the basics of meat and veg, bread I have been making for some time and I have always had a bread machine although I am now on my third model I have changed the way I use it, I was never altogether happy with the bread that the machine produced so just lately I have been using it to make the dough then I cook it the traditional way in the oven and now I am happy with my bread.
I make jam, chutneys and pickles, bake cakes and biscuits and I have just started doing fudge.
Hubby makes wine and beers and a few liqueurs and he made his first batch of champagne this year and its fab.
I do also knit and sew make jewelery and soft toys this year as a step closer to our dream we have decided that all Christmas presents and birthday presents we give are to be made hand made so I have just made a start, at the week end I made my youngest grandchild a patchwork cot quilt for Christmas, and I made another granddaughter a Mrs Golly doll for her birthday, I am part way through knitting my daughter a cardigan for Christmas and I have knitted a good supply of socks, there is a long way to go as we have four grown up children and eleven grandchildren so I better get my skates on.
so this brings you more or less up to date on were we are in our dream, over the week end we had a major de-clutter in the garden sheds the one nearest the house is going to be demolished next week end, we have a hot tub we want to site there. also hubby has to build a cover over the wood store so he is going to use the shed roof, we have been stocking up on logs ready for winter, we plan to use the wood burner as much as possible so we can cut back on using the heating.
I hope to be able to update this blog on a regular basis so you can follow our adventures at the bottom of the garden, right now I am eyeing up a pigeon that strolling around the veg patch like it owns it. The phot I have put up today shows the productive end of the garden and the field at the back that we would like to rent if only we could get the owner to agree.
Posted by Dawn at 01:26:00