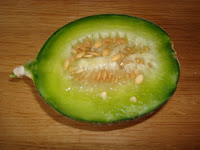 This is the second half of the first Melon of the season, I ate the first half and it was fantastic, we have two more melons in the greenhouse not ready to eat yet, this was the smallest one.
Its not been a brilliant year for the Melons I usually manage to get a good dozen or so.
Its been a busy week so far, the weather has been fairly good, nice and dry so I have been outside clearing and weeding, another week I think then I will start insulating the greenhouses, a sure sign that Autumn has arrived. then it will be big haul of starting to move things under cover that need protection for winter. In preparation I am giving everything a good feed this week end and start tidying them up.
I have been making sausages this week and more planned for later on today, I want to get a least 50-60 packs done and in the freezer, we do like sausages and you can put anything in them and they are so easy to do.
Our lovely butcher gave us a load of Hogs Casings for free, our sausages are more of a chipolata size, rather than the big fat ones. So far I have done, Pork apple and Mango, and Spicy Beef, the cost is very favorable compared to shop prices. The pork ones were £2 for 16 sausages, yes I know you can get those cheap cheap ones but have you actually tasted them and worse still have you read the list of ingredients. FRIGHTENING.
Our new batch of hatching eggs arrived the other day so they are in the incubator doing what fertile eggs do I hope. We have six eggs in total this time, 4 black silkies 1 lemon cuckoo and 1 Peking partridge so it will be interesting to see what hatches out.
I was a bit shocked at my shopping bill this week, I checked and re-checked the receipt but it was correct, it came to £29, I bought two big bags of bread flour, bag of sugar, some meat for the sausages, some kit kats they were on special offer and hubby likes a kit kat, I did buy a big tin of chocolates as I have some friends coming to stop for the week end in a few weeks so I thought it would be nice to have a sweetie, mushrooms, milk, orange juice and I really cant think what else I might have bought oh some beansprouts as we were having stir fry that evening for dinner. but it is still a lot of money for only 1 and a 1/2 carrier bags. £10 was on meat and the chocolates were £5 that still leaves £14 on basics and very basics at that.
There is a new magazine out called Hand Crafted I have added a link to this page, it looks brilliant, and you get the things with each issue to make something, it also covers making gift/items from things around the home. With issue 1 you get the stuff to make a soap, and issue 1 cost 99p it is a part work and each issue is £2.99 but so far it looks worth it.
Posted by Dawn at 01:16:00