They grow up so fast 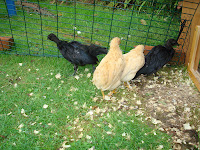 The young bantams we hatched out are growing up so fast, they are now 7 weeks old, they moved outside a few weeks ago and a few weeks ago they came totally off heat, yesterday they moved onto growers food. I took this picture while I was cleaning them out this afternoon, they have done really well, considering it was our first go at hatching, we started we 6 Bantem eggs, 3 Plymouth Rocks and 3 Samutra's all we had was a little incubator that came with minuscule instructions.
Everything we read on incubation seemed to contradict what the other said so we really didn't
know what we were doing, we tried to candle them but didn't know what we were looking for, 4 looked different to the other 2 but were they a good 4 or bad 4 we kept them all just in case.
we were turning them twice a day then we were told we should be turning them 4-6 times a day then were read they should be turned every hour, we went back to turning twice a day and stopped at day 17 then on day 19 one of them started pipping I was so excited, over the next couple of days 4 hatched out we moved them into an indoor brooder that hubby made, the other two eggs just sat there and didn't do anything, eventually we threw them away.
Our babies have continued to thrive they started eating and drinking no problem then on day three I noticed a problem with one of the Samutras his eyes were not open and he kept bumping into things, we bathed his eyes he kicked up such a racket but his eyes opened and soon he was running around with the others, then the same chick a week later developed a very messy bottom that was starting to dry up and compact, so once again with cotton buds he was succumbed to a clean up operation.
They have remained relatively trouble free, again moving them outside there was lots of conflict advice, Hubby built them an outside brooder, and out they went we have done it by instinct it has been a very wet wet wet summer so we have left them with there light at night until a few days ago when it went off and stayed off but they have been fine and we have had a few dry days this week as well.
So now they are on the way to growing up fast i have taken the plunge and ordered some more eggs due to arrive next Tuesday.
This time I have gone for White Silkies and fingers crossed I will be a bit more clued up as to what I am doing this time round.
We wont do anymore then until the spring then we are looking at some Sasso birds for the table I also fancy some Quail but we will have to see, a lot could happen between now and next spring.
Posted by Dawn at 09:02:00