Encounter with a Hamburg 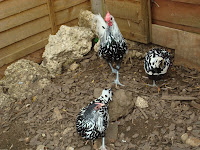 This handsome trio are Speckled Hamburgs, I went along to the East of England Autumn show, and fell in love with these lovely bantams, so bought them, I have never planned to have a cockerel, but he is a bantam cockerel so smaller than the average. They have been called Spit Spat and Spot.
Having got them home and not having a house and run for them they were temporally housed in a big rabbit cage I knocked up a house for them that evening and put them to bed, next morning they had to back in the rabbit cage until I got there run built. Now hubby is away climbing mountains in Nepal so I am having to manage everything on my own including run building.
I thought I did very well I even had a gate with hinges on the run, I installed them and they set about settling down.
Come bedtime (chicken bedtime) I start on my rounds shutting up various chickens, when I come to the Hamburgs no sign of them, the run and house were empty !!!
Upon hearing a rustling above me I investigated they had all decided to roost in the tree !!!!
So I was there in the dark with a ladder and torch retrieving chickens from the tree, next day I netted over the top of there run and around the tree, that night they were in the tree again they had found a gap !!!! now I am not being unreasonable here but I do not want to be going through the same performance every night when there is a perfectly good chicken house for them to go in.
Day three I decided wings had to be clipped not an easy task by yourself as you have to hold a feisty chicken that is not used to being handled spread the wing and then clip off the ends of the last five feathers, I caught the ends and got then done But Spit the cockerel had different ideas and didn't fancy the idea of a free haircut, he put up a fight, got hiss talons caught under my ring and dislocated my little finger, PAIN!!!! like I have never know before, I had tears. I caught him again clipped his wing and went off to console myself, I strapped my finger to the others thinking at the time it was broken. it was swelling rapidly but I didn't want my mum's wedding ring cut off so I stuck with it. That night one of the hens got really tangled up in the netting and I had to cut her out with scissors. this wasn't going to work.
The next few nights as soon as I saw them trying to roost I put them in the hen house hoping they would get the message, but no they were not having it. still being in pain with my fingers I just couldn't carry on every evening like this.
I sought medical advice found out the finger was dislocated so had it put back in, then set about building them a new run away from trees, moved there house and them into it and that first evening they went to bed no problem.
Our one cockerel looks like its turning into three, my 4 young bantams that I hatched August are growing up really fast, we ended up with 2 Plymouth rocks and 2 Sumatra's well we defiantly have a Plymouth rock cockerel, he has been trying to crow, bless him but he sounds like a chain saw trying to start up. and one of the Sumatra's is developing a rather long tail so it looks like we might have a cockerel there as well. if they turn into couples we may well keep them in there pairs we will have to see.
Clocks went back last night so it was an early start today, but it will also be an early finish, now winter is just round the corner I have been preparing for it, will catch up again tomorrow.
Posted by Dawn at 00:03:00 No comments:

Where do I start 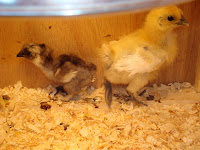 Sorry seems to a good place to apologise for taking so long getting round to posting again, it really has been a very busy

time since I last posted and it may take several postings to bring up to date what has gone on.

Firstly hubby has gone off to Nepal, he is climbing Mount Pumori so I left to hold things together by myself for 6 weeks, the longest time we have been apart, so now I have to get out of bed in the morning at some ungodly hour and let all the chooks out, a job he did as he was always up early to go to work, a few days after he left our Silkie eggs in the incubator were due to hatch, the first egg started pipping and 24 hrs later there wasn't much progress at all, so following Katie Thears advice I peel back some of the shell from the top end, several hours later still no more progress and it was noticeable that the chick was get weaker, so I took the plunge and helped it out of its shell, it was very weak and a lot of the membranes had dried on to it, what a sorry state to be in, I left it in the incubator over night expecting to find it dead in the morning as it was very weak barley moving, next morning it was still alive to my surprise !! it was a bit fluffed up but not making any attempt to stand, when I picked it up its little legs just dangled there! oh dear knowing it wouldn't be fair to keep a weak chick if useless legs, the kindest thing of course is to dispatch them, but I popped it in to the brooder to decide its fate, and also coming to terms myself at what I was going to have to do, the reality of keeping your own livestock is making life and death descions and having to carry out unpleasant tasks. As much as it pains you to do so,.

I noticed another egg had started to pip, so I consoled myself with the fact this next one might be ok, I went through to the brooder to check on little Gizmo, so called because he looks like one of the gremlins, and there he was trying to stand up, I am so glad I didn't make any rash descions earlier, he seemed to be getting stronger cheeping away and trying to stand and walk, by the end of the day he had almost mastered his skills although very shaky and weak but he was getting stronger, unfortunately the 2nd egg stopped making progress and the next day very much the same so once again I helped but this little chick didn't survive, the other eggs were left until the end of the week, three were only part formed and the fourth the chick was dead, it was big I don't think it could turn itself into the hatching position, that egg was chock a block with chick.

so now I had a predicament one little black silkie chick who was now capable of running around, that was feeding fine but on its lonesome, not a good position to be in, so I popped up to Thrift farm its council owned and run for people with learning disability's to see if they had any young chicks that could keep Gizmo company, Bingo they had a white silkie a week older than Gizmo runt of the flock so it seemed as it was the smallest, so after parting with £2.50 I took Bingo home in a tiny box to be a new friend for Gizmo, popped them in together and Gizmo objected so loud you would think some-one was trying to murder him, of course he had never seen another chick, Bingo just sat quietly in the corner, so I left them too it, a few hours later they were the best of friends and are now inseparable, the pic shows Bingo Gizmo the day after they were introduced, that was three weeks ago, they are growing up so fast and getting there adult feathers, I am just hoping they don't both turn out to be cockerels.

On the subject of cockerels I will update you tomorrow on the Cockerel incident.