Making a start with growing 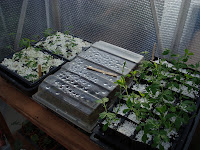 I have been down in the greenhouses this morning, doing a bit of watering, here is a picture of how the sweet peas and lupins are coming on I sowed in November, I pinched out the tops of the sweet peas and they have bushed out really well, the lupins have started getting there true leaves now, I am trying to grow all my own plants this year and I have lots of areas in the garden to fill, I took lots of cuttings at the end of summer and they seem to be doing alright as well, I have loads of seeds so in the next few weeks I am going to start sowing them mainly the seeds for hanging baskets. I divide up some plants in the autum as well so I am hoping there will be plenty in flower this year and it wont have cost me the earth too do it.
I had some potatoes sprouting in the basket so they have now been planted up in buckets in the green house, there are not many of them but fingers crossed we will get a few early spuds, I must see about ordering some seed potatoes as well, I seem to have everything else apart from those.
The chickens have started laying again yipee, a sure sign that the days are getting longer, I am looking forward to my youngsters coming into lay for the first time, as they are paired off I am hoping for some fertile eggs to be able to offer for sale.
We went chicken shopping yesterday for my daughter and granddaughters, we made them a chicken run and house for there Christmas and promised chickens for there birthdays in January, the usual place we get chooks from is only open school hours and we had said the girls could choose there own chooks, so I looked up a breeder on the Poultry Breeders web site, we arranged to go over there at 4pm, BIG BIG mistake, this person was not what I would call a breeder and defiantly not a reputable one, he only had 7 chickens 3 bantems 2 west sussex and 2 orpingtons, the garden was like a junk yard and he had to move loads of stuff just for us to get in, the chicken run was in an abysmal state, the feeders were empty and full of mud, he used a plastic paddling pool for water and it was frozen through he tried to say it had frozen again during the day, very doubtful the ice was about 4 inches thick, it hadn't been defrosted at all there was slices of bread all over the run and you couldn't help but walk on them, I felt really sorry for the chooks so we took 3 of them, 2 bantems and one west sussex just to give them a better life, the kids were over the moon with them, but then they are too young to realise the conditions they have been kept in, he also breeds dogs and the place was filthy, all you could hear was puppies yapping, I am making a call to RSPCA as I don't think the chooks have access to water and food, so goodness knows what conditions the puppies are kept in. He said he doesn't keep cockerels, he buys in fertilised eggs hatches them and then sells them on when they reach POL, I asked what he does with the cockerels his reply was dog food.
It makes you wonder doesn't it, I know the chooks will be well looked after at my daughters and I think we have done them a favour, I wish I had the space myself to take the others but I don't. I just hope the RSPCA will take them and find them good homes.
Posted by Dawn at 04:28:00