Its Been a while 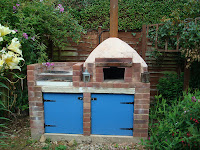 Its been a while since I have visited my blog and such a lot has happened, brick oven is now all completed and and it has been a bit of a learning curve using it but we got there in the end, unfortunatly we lost all our bees over winter, very sad and frustrating but on the flip side we managed to get a swarm back in May got them established in hive number one and they have been going like the clappers, we had to add an extra super, (thats the bit were they make honey) so the hive is now running with two supers, yesterday we had a shuffle round with filled frames put in a crown clearing board and we hope this evening if the weather is decent to take off our first frames of honey, I bought an extractor so we are ready to go.
at the start of June we got a second swarm a lot smaller I think it was a cluster swarm and popped them into hive number two, they are into reproduction but being a lot smaller we wont be getting honey from them this year, next year tho fingers crossed they will be established enough and both hives will be in production.
Veggies and fruit and have been doing great this year, tomatoes, cucumbers and courgettes so far have been over producing and there has been lots of give aways, beans have had a slow start but are now romping away, garlic and onions are fine, turnips and swiss chard have been good and the first sowing of peas were fab and most are now in the freezer, I sarted off some more peas in modules and yesterday we gotr those planted out so providing the pidgeons stay off them we will fingers crossed get a good second crop.
I am going to sign of now and should be back tomorrow with a further update and some photos, day off work tomorrow.
Posted by Dawn at 23:53:00