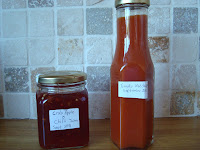 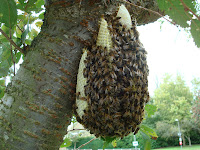 Its my day off and the sun is shining, brilliant not something that happens very often on my day off, so its out in the garden working away getting all hot and bothered, so i have come in for a bit of a cool down, first thing this morning I got started with some crab apple and chilli jam, hubby cooked the apples on Sundayand left them to drain through the jelly bag, suppose to be for 24hrs, then he was struck down with the dreaded MAN FLU, I spent last week battling a cold that knocked me for six, but battled on going to work, cooking cleaning all the usual, he starts with it and cant even finish his crab apple jelly, so this morning I got it done out of the way, it looks a lovely colour, added some of the chillis we have been growing, it has set great and is now ready to be consumed. As we have had a glut of tomatoes and not wanting them to go to waste, I also set about making some Tomato Ketchup, a fairly simple recipe

roughly chop up the tomatoes, shallots ginger and garlic, throw into a large saucepan and slowely bring to the boil, reduce heat cover and simmer for about 20mins, until the shallots are tender, blitz the mixture with a blender or food processer, push the mixture through a sive into a clean saucepan, bring the puree to the boil then simmer until the mixture is reduced by half, add the vinigar sugar, paprika salt to the pan stir and simmer until well reduced and thickened, it will thicken more as it cools. pour into bottles or jars, store in the fridge when cool makes about a pint.
mine was made with a mixture of red and yellow tomatoes, tastes very yummy and has a kick to it. While pottering about the garden and house I am waiting for a very important delivery, Ambrosia Fondant for the bees, even though they seem to have plenty of food to see them through the winter, I am not taking any chances this year, as we have lost bees through the last two winters, I am going to feed them up and make sure they have more than enough stores.
Now as you can see from the photo there is a well established colony of bees, let me tell you about them, last Tuesday I get a phonecall from my son in law who works for pest control, about a swarm of bees, SWARM IN SEPTEMBER, I dont think so, he said its just a small one about 50 bees, (me thinks he cant count) so UI went and had a look, the photo shows what I found, so we suited up, cut the wax comb dropped it in abox and I took it home, we are trying to keep them settled in the nuculus box and hope soon to move them into the spare hive, but they have very little winter stores so they will need feeding, another reason for getting the feed, so please hurry mr delivery man, as I need to go out.