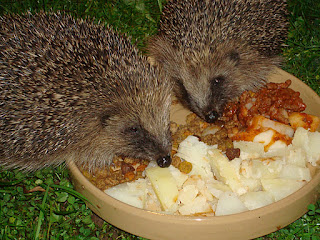 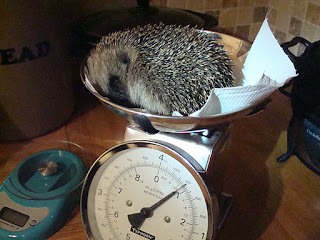 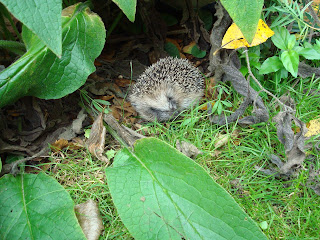 A few ago we came across young hedgehog in the garden that we have named Bent Nose, because he has a very distinctive bent nose, he has become a firm friend of hubby, who dutiful feeds him every evening with dog meat, cat biscuits and mash poatoe, we are trying to get him up to 500grms in weight, which according to the reasearch we have done is what he has to be to hibernate succesfully, when we found him he was a meger 125grms, next weigh in he was up to 300grms, then crept up to 400grms last night he weighed in at 480grms so is almost there, it seems that Bent Nose has now been joined by a friend for dinner, his friend is bigger so we assume is a good weight to hibernate, so far the weather has been holding and so he wont be scurring off to hibernate just yet, and there is a good chance he will make the target in time.

Talking of the weather we are picking our second crop of strawberries and have had a good dozen or so each day, a nice welcome if not unexpected bonus this time of year, we still have peppers chillis and a few tomatoes to pick, there are loads of figs on the trees but I dont think they will ripen in time, we have had some during the summer but it would be nice to get a second crop, never mind cant have everything, got one of the greenhouses cleaned out and insulated ready for winter, just got the other one to do when we pick the last crops from it, and I have started moving in tender plants, we had a mild frost the other day, but I am not going to risk losing plants this year I lost so many last year with the harsh winter. Time to sign off will be back soon with news from the kitchen.
Posted by Dawn at 12:40:00