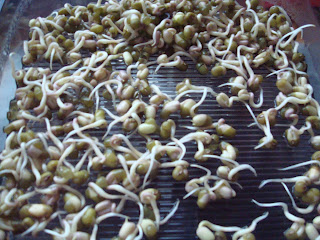 We have just set our second set of seeds for sprouting, we had a batch of Mung Beans the other night in a stir fry, and we have a nice tub of sprouted Rocket and sprouted Red Cabbage to add to sandwiches through the week, This second lot we have on the go is again a tray of Mung Beans, a tray of Rocket and Red Cabbage mixed as they take about the same time and a tray of Cress as I found a packet in my seed box a few years old so don't know if they are still viable.
Its the time of year when everything is on the go in the greenhouses and hubby has cornered the market in Okra me thinks, he has got a bit carried away with them, I sure we can do some swaps with, them, we are also having ago with Mushroom Spawn again, so we have mixed some with well rotted horse manure in some wooden troughs hubby made, and I have sterilising straw with boiling water so I can try some Oyster Mushrooms, we have had successful crops of Oyster Mushrooms before so fingers crossed for this time.
The chickens are still laying for Britain, and the Bees are busy busy, I have just treated Hubby to a new air rifle so hopefully we can make a demise in the wood pigeon population that seems to be on the rampage at the moment in the garden, I have high hopes for some pigeon pie, his old air rifle he has had for 30 years and just isn't up to the job, so he is like a little boy with all his Christmases come at once, the carcasses from the pigeons we hope to use for bait cray fishing as its crayfish time again, so lots going on.
We have booked a cottage and are off to S. wales start of June to have a look around and make a start getting to know the area, in readiness for our move, we hope to spend what ever time we can there over the next coming year, its so exciting to think our dream is almost within or grasp, in anticipation of this I am having a good clear out, and getting stuff on e-bay, I have two knitting machines to get listed, (I am keeping the other two,) a box of dressmaking patterns and two boxes of knitting machine magazines, stuff is being sent to charity shops and lastly hubby has being making trips to the tip, did have a clear out of the shed this morning although there wasn't much rubbish, I do try to keep the shed organised. Time to get dinner started will be back again soon.
Posted by Dawn at 09:03:00