Busy as the Bees Day 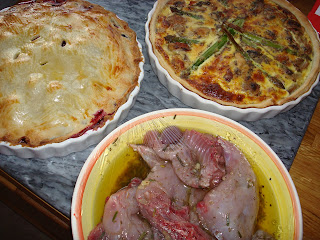 Not a day of glorious weather but decent enough to get outside and catch up on all that the rain has prevented us from doing, today started with finding out our bees had swarmed and settled in next doors garden in the hedge, donning suits and gathering all our bits we set too getting them back, just as well the spare hive was set up last week in preparation of getting a swarm, they seemed to have settled in there new home, we will inspect the other hive tomorrow weather permitting and check that there are no more queen cells. Other half has been busy this week shooting pigeons I think we have had about 6, and today managed a couple of rabbits one had really bad mixi so we settled for one that's it marinading in the yellow bowl for tomorrows dinner, made a mixed fruit pie as well from some of last years fruit, and as we have a glut of eggs again made up a bacon mushroom and asparagus flan that will do for lunches along with some Herman Friendship Fruit Cake.
Everything is coming on great in the greenhouses it will be nice when this cold spell finally breaks and we can get things moved into the ground, we did get some sprouts out today and broccoli last week-end, the sweetcorn has also gone out it will just have to take its chances as we were desperate for the space. The strawberries are all in flower so I got straw put around them, on time for a change, usually I am so busy with all the young plants I don't get the time to see to the strawberries until its too late and the fruit gets all muddy, so while you are held up with some jobs you catch up on others, next week end we are hoping to go to the smallholders show in Wales, usually we go to Ardingly in Sussex so it will be nice to see a different one, that's all for now things to do.
﻿
Posted by Dawn at 12:30:00