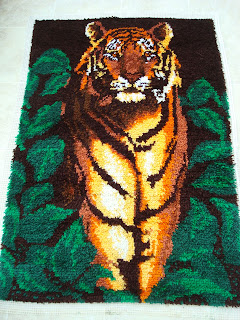 This has been one of those unfinished projects lurking in its box under the sofa, over the past 12 years it has occasionally come out and seen daylight, July 29th this year it came out of the box for the last time as I was determined to clear some of those unfinished projects starting with this Tiger in the Jungle latch hook kit, it was half finished when I took it out, and every evening after work I had dutifully sat down and worked on it, today it has finally been finished and the box has gone for ever, it is a joyous moment when you complete something that has been hanging about for so long, its to be hung on the wall in the front bedroom. My next unfinished project is a tapestry cushion front of a cockerel, quarter of it has been completed now I am going to get it finished and turn it into the cushion it deserves to be to sit on the sofa in the conservatory.

Yesterday was a day spent in the garden, clearing ground from spent crops and getting some winter veg planted out, tidying things in the greenhouses and tunnel, and picking raspberries and plums. We popped to the farm shop as I wanted some vitamin conditioner for the chooks to make sure they are in good shape to get through the coming winter, picked up a tray of 14 bell peppers for a £1 chopped them up and dried them in the dehydrator, I have fallen in love with drying everything.

While cleaning out the chooks I noticed that Gizmo my Silky Cockerel was limping, I noticed his spur had grown to about 4 inches long and had curled round and was catching him on his leg, I was horrified I had not noticed it before but he is so fluffy it was hidden, we managed to catch him and with some dog nail clippers I have taken off about 1/2 inch in a few weeks we will take a bit more off, while we had him we took the opportunity to apply some louse powder, so of course we then had to catch all the others and do the same, we also took the opportunity to trim the spurs of the other cock as well.

So a lot has been achieved this bank holiday weekend, I hope you all had a good one as well.