Our tunnel in the garden isn't the biggest tunnel going, its about 9ft long and 5ft wide, its been a bit of a pain to tell the truth, I bought it about 3 years ago at the garden center for £120 or there abouts, I managed to assemble it by myself and it did well for about 6 months, then the Autumn weather set it and the first gales we had tore it to shreds, so the following spring I bought a new cover this one seemed more promising being reinforced, we also moved it to a more sheltered part of the garden, come the Autumn it was once again torn to shreds, I was prepared to give up at this point, but we thought we would give it one more go, this time instead of the ready made covers you could get we bought proper tunnel plastic covering, so far it looks like it has got through the Autumn and winter, so my hope rise high as I get to work in the tunnel in a new growing season.

Growing Year Gets on the Way

Its time to get some of the seeds started, although I am reluctant to do too much, as this year we are hoping to move to pastures new, the house is on the market and I don't really want to fill the garden with loads of stuff for some-one else, so a lot of this years growing is going to be done in containers, We will still get veg in the ground but not as much as we do normally.
We are still harvesting leeks and Kale and the winter cabbage and broccoli are not far off ready to harvest, then it will be the spinach. 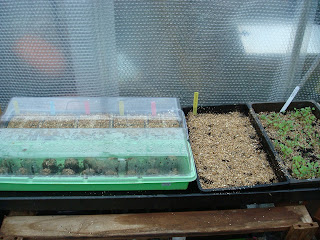 In the greenhouse I have got started some Broad Beans and trays of Salad leaves, also some Basil, Coriander a few toms, Aubergine and Peppers, the chillies we overwintered and wont be growing more this year, we also have some carrots come on in a container.
Potatoes are Chitin, I am trying Stevia the sweetener again, the Garlic that was planted in October is coming on well and I put some in containers to grow as well as in the ground. I am trailing some mushrooms kits as well.
When its pouring with rain outside there is nothing better than pottering in a warm greenhouse.

The second greenhouse has been used to overwinter the citrus trees and tender plants and its all looking well, I did also pot up some strawberry runners to take with us when we move, if I keep them in the greenhouse we might just get a few early strawberries from them this spring.
I have also planted a Rhubarb crown in a pot.

We haven't decided what to plant up in the tunnel yet, again I am reluctant to put anything in the ground, its going to be hard leaving the greenhouses and the tunnel behind all the water barrels compost bins sheds and chicken run, but it means we can start a fresh again. All we need to do is find a buyer.

Today a lovely road kill was found, Chinese Water Deer, that is the one with the tusks, 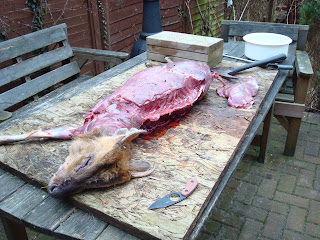 All the meat was taken off after skinning that we could use, I have worked out there is about 20 meals for the 2 of us from it, so that has now taken up the space in the freezer, which this week I have been trying to use up stuff from so I could give it a good clean out, so that is now put on the back burner, the skin I am going to attempt to cure and then it can be put to some use, don't know what yet. 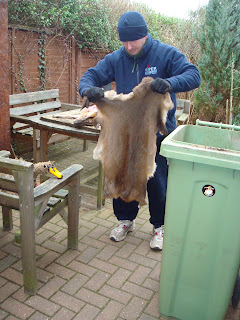 so the first step was laying it out flesh side up and rubbing cooking salt into it making sure you get into all the nooks and crannies and right up to the edges. 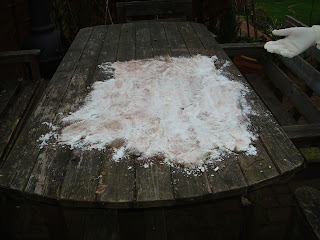 then fold the flesh sides together, it will then be left for a week with a tray underneath to catch any liquid that drains off. 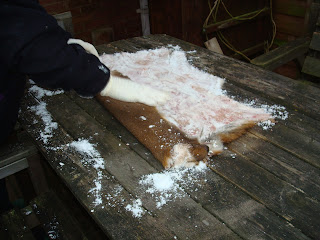 so next week will be the next stage of my tanning exercise. the whole process is going to take about 3 weeks, I have got a tanning kit at the ready, I bought it a few months ago in readiness for when we manage to get a hide.