I hope every one has had a lovely mothers day, I did the sun was out, the sky was blue brilliant weather for the time of year and of course the first day of British summertime.
We were still up at 6am even though the clocks went forward, it meant the chooks were let out early they didn't know what to make of that, then it was over to the Alpacas again they were a bit taken aback with an early breakfast, we decided to give them an early walk instead of taking them out in the afternoon, I also took the opportunity to try harnessing them on my own, success they were well behaved and i managed to get them both into there harnesses,  so off we went for a walk down into the village, I lost count the amount of times we were stopped and asked questions, there were 3 photo stops, so our plan for an early morning undisturbed walk didn't pan out as expected but it was still enjoyable.
The rest of the day was spent outside in the garden, trimming hedges, potting up seedlings, sowing more seeds and I took the insulation of the second greenhouse, I got stuck into clearing up the flower borders as hubby got stuck into cooking dinner, venison tonight from a road kill we picked up last week end,
It was such a mild evening we sat outside until 8pm and it gave a chance for me to try out one of the home made oil lamps. 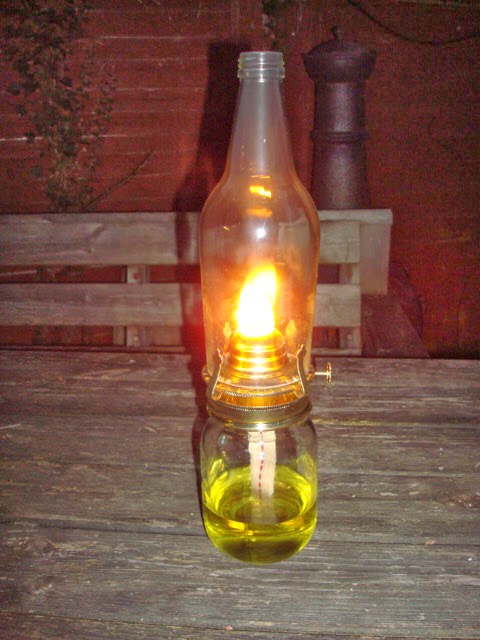 It gave off a surprising amount of light, the base is a kilner jar, I bought some oil lamp fittings from the states made to fit on kilner jars, they came with wicks as well. The lamp globe is made from a glass bottle that we cut the base off with a bottle cutter.
So all in all a very productive day I hope you all had similar and made the most of the smashing weather.
Posted by Dawn at 13:00:00