We have 2 Top Bar Hives that are occupied the colonies have been there for a couple of years, in No1 I noticed that the colony was small they were slow to get going this year, yest No2 hive were bursting to overflow and were no doubt going to swarm.
After reading my bee manual, I decided to move the small colony into an empty national hive, giving them less space and a chance to build up there brood, this would free up a top bar hive that I could do a hive split with the bigger colony in No2 to try and prevent swarming and give them space to expand.
The book make it all sound very easy but first I decided to set up a Baited Swarm Hive over the other side of the garden, the weather isn't good for the next few days so I may not get a chance to do the split until next week, so baiting a hive might just entice a swarm to set up home there if the No2 hive decides to swarm in the meantime. 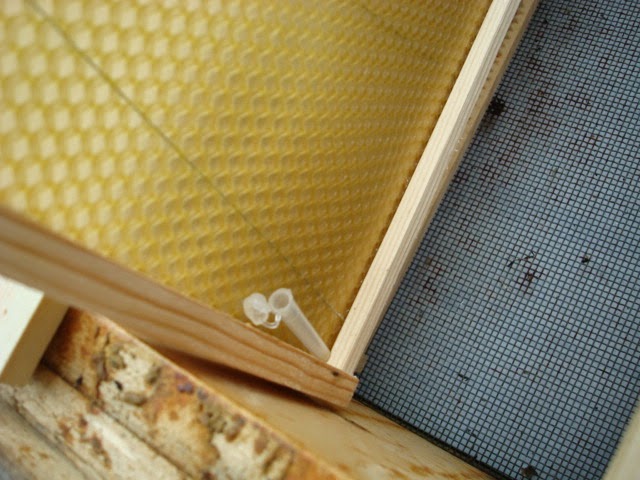 The pheromone bait in situ in the baited hive.
I spent the morning gathering everything together I need for my hive switch, because they were coming from a top bar into a national its wasn't just going to be a straight forward switch of frames, in the top bar they build there own comb and its about 12 inches deep and shaped to fit in the top bar, in the national they have specific shaped frames usually with a foundation wax sheet to build on, so first step was to take the foundation sheet from 7 of the 10 frames so I could fit there comb into the frame
Next step move new hive next to old hive and have everything to hand I would need 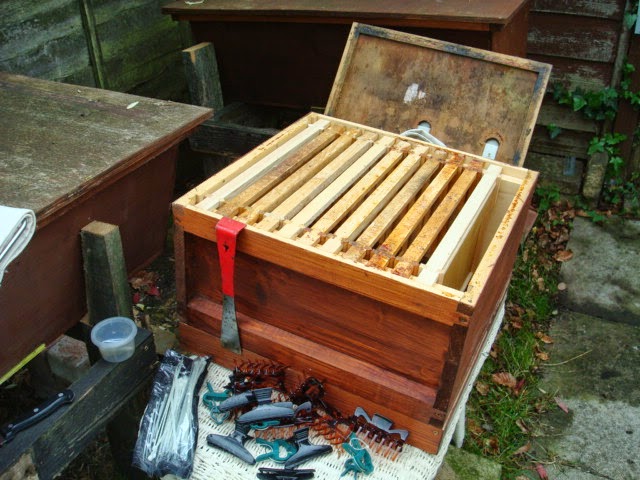 The top bar Hive is to the left
Then it was suit up and get started, I didn't want to smoke the bees, its not something I do very often, I didn't want to stress them any more than needed.
I made a start on transferring comb with brood, pollen and food stores 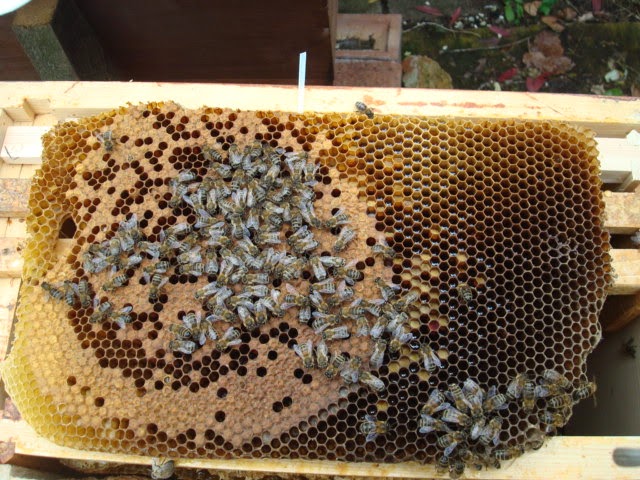 Here is a bit of comb with brood cut to fit in the national frame, 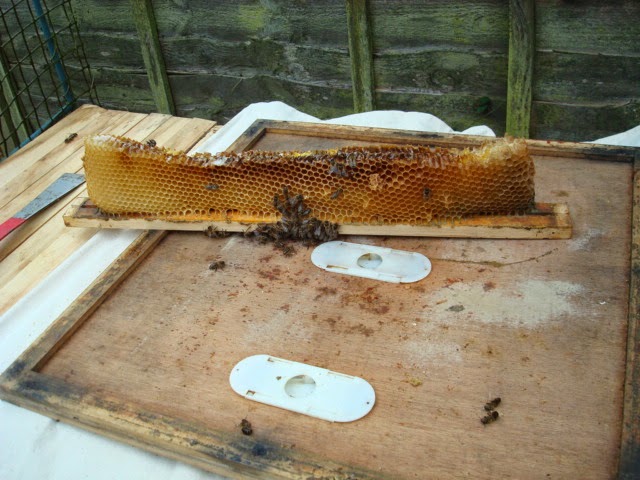 This is the top bar it was cut from, I held up the national frame to the comb and work out were I could cut to keep as much brood and stores as possible
The comb then has to be fixed on to the frame 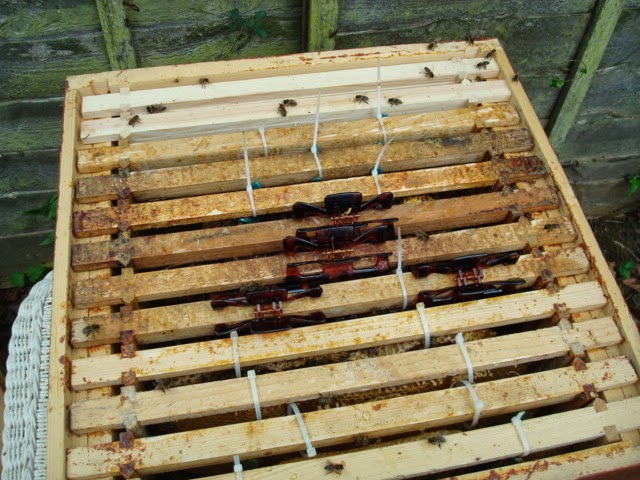 This is all the frames with cut comb on in place, I fasten the comb on with Hair clips and cable ties, the bees will set about repairing the comb and fix it properly to the frame, so in a few weeks if I see the comb is fixed I will remove my fixes. 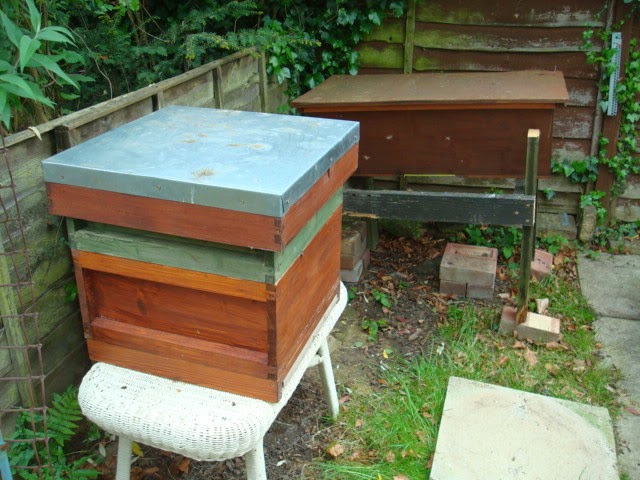 New hive in the same place the old hive was
Any flying bees will be able to return to the new hive, the bees that transferred with the brood were the nurse bees and queen, I have now marked the queen for this year so she will be easier to spot. 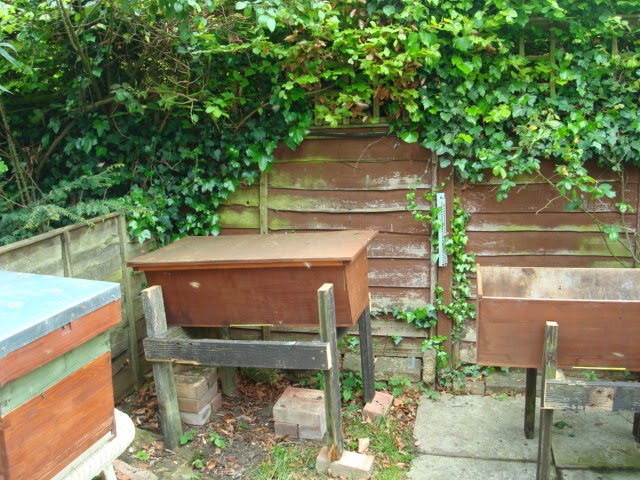 Empty top bar on the right in place ready for when I split the other top bar,
Sorry I didn't get many photos taken but its not easy to use a camera when you are handling bees and your hands are covered in sticky stuff. 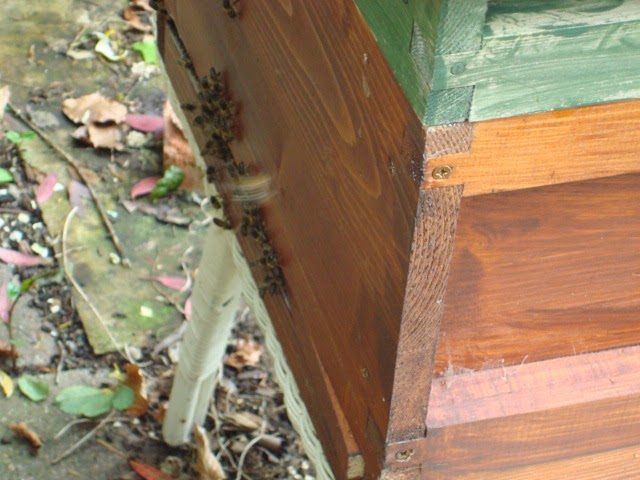 Flying bees returning to the new hive, I have now put a landing platform in place for them, the whole process took me 3 hours to do, I was shattered the concentration needed, I did stop for a couple of breaks just cover the hives over and take a break, unfortunately hubby was at work so it was a job I had to do on my own.
I find doing anything like this get everything prepared before hand, run through in your mind a few times what you are going to do and how, stay calm and don't get stressed.
Next week will be the hive split that will be another big job, having looked in the No2 hive there is a lot of brace comb that need cutting away, I need a really sunny day so most of the bees will be away from the hive making it easier.

As well as getting the hive sorted yesterday, I managed to empty the airing cupboard and bag up all what was no longer needed, bedding we were keeping is now in draws under the bed, I also went through the freezers and anything that looked suspect, unidentifiable has now gone so that is more space freed up and I know exactly what is there.
So that was yesterday today its forecast rain so I am working on an indoor list and have a few excursions to make.
Posted by Dawn at 23:25:00