Tonight as I write I am sitting in a comfy chair for the first time in 2 weeks, and have a comfy bed to look forward to later, we had the carpet fitters in today, they have boarded out the upstairs rooms and landing, fitted the carpets in all three bedrooms, stairs and living room, and laid the floor covering in the bathroom, so at long last we could move our bed in and the sofas it is sheer bliss, we haven't brought any other furniture in yet we will do that over the next few days, the fitters will be back in the morning to do the landing and next week we should get the kitchen done.
Tomorrow we take delivery of kitchen appliances, as our other were all integrated we have had to replace them all, so we have ordered a tall larder fridge, chest freezer, washing machine, dishwasher, cooker with induction hob and fan oven. Although I love the Rayburn there will be times it wont be used.
We have decided against a dryer at the moment, also a microwave we rarely used the other one.
I had some bits arrive for my Rayburn today, a cold shelf that basically cuts the oven in half, some enamel cleaner, a scraper for the hob, a half size roasting tin and grill rack.
While the carpet fitters were busy in the house we got stuck into some organising outside, first off was the old greenhouse frame that was tucked under the front hedge 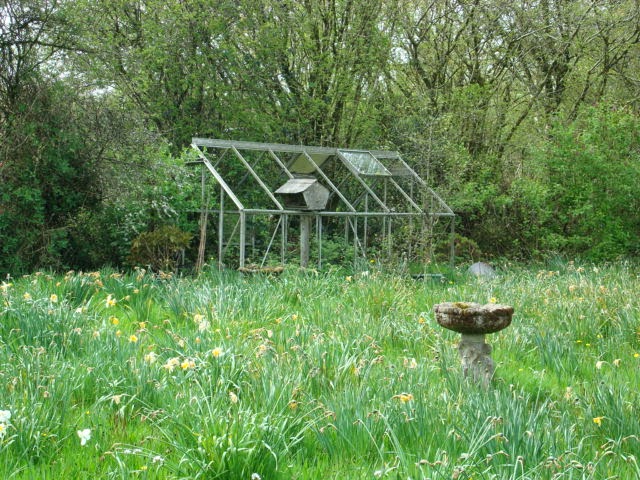 this picture was taken when we came to view back in spring, we cut away all the brambles that were holding it down, and moved it out to have a good look at, we decided it is worth keeping and reusing, its an aluminium frame its about 8ft by 14ft there is a load of glass panes for it in the lean to, so we lifted it up and relocated it at the top of the field 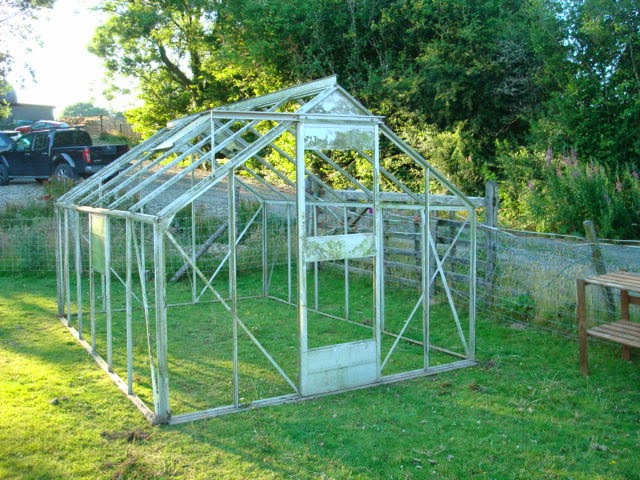 Tomorrows job is to scrub it down and start fitting the glass, I know some of the panes are broken, but it is still cheaper to replace a few broken panes than buy another greenhouse, I plan to put membrane on the ground and cover it with gravel like I had before.
Hubby got out the strimmer today and made a start on cutting back the rear garden 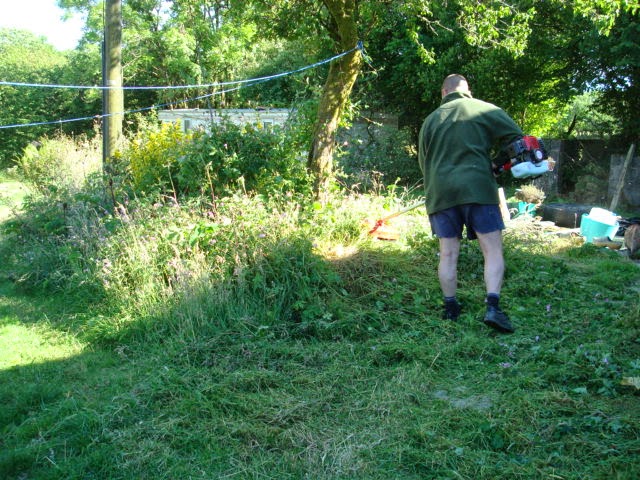 Once it was cut back we discovered a stone bank so I will have to give some thought on what to do with that now, I would like to keep it as a feature. 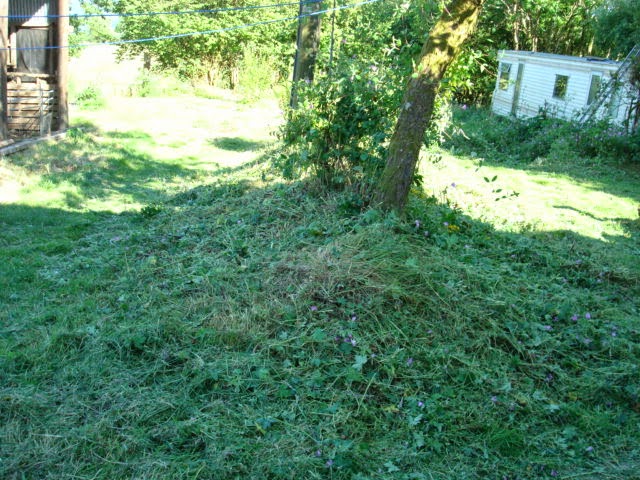 I have some ideas on what I would to do with various parts of the garden, but they may well change.
We ordered a pig start up kit today it comes with everything but the pigs and feed, Pig Starter Kit
It should be with us next week, hubby heads back to work next Monday and doesn't return to the following week, so it will be here waiting for him to put together, in a couple of weeks we should have our first couple of weaners to fatten up for the freezer. We plan to use them to clear the ground in part of the field that will become the vegetable garden and fruit garden.
Time now to enjoy the comfort of bed :-)
Posted by Dawn at 14:31:00