I changed my mind on this weeks post, my other idea can wait for another week, this week I thought I would share a bit more of the little herd of 5 female alpacas,
Welcome to the maternity suite 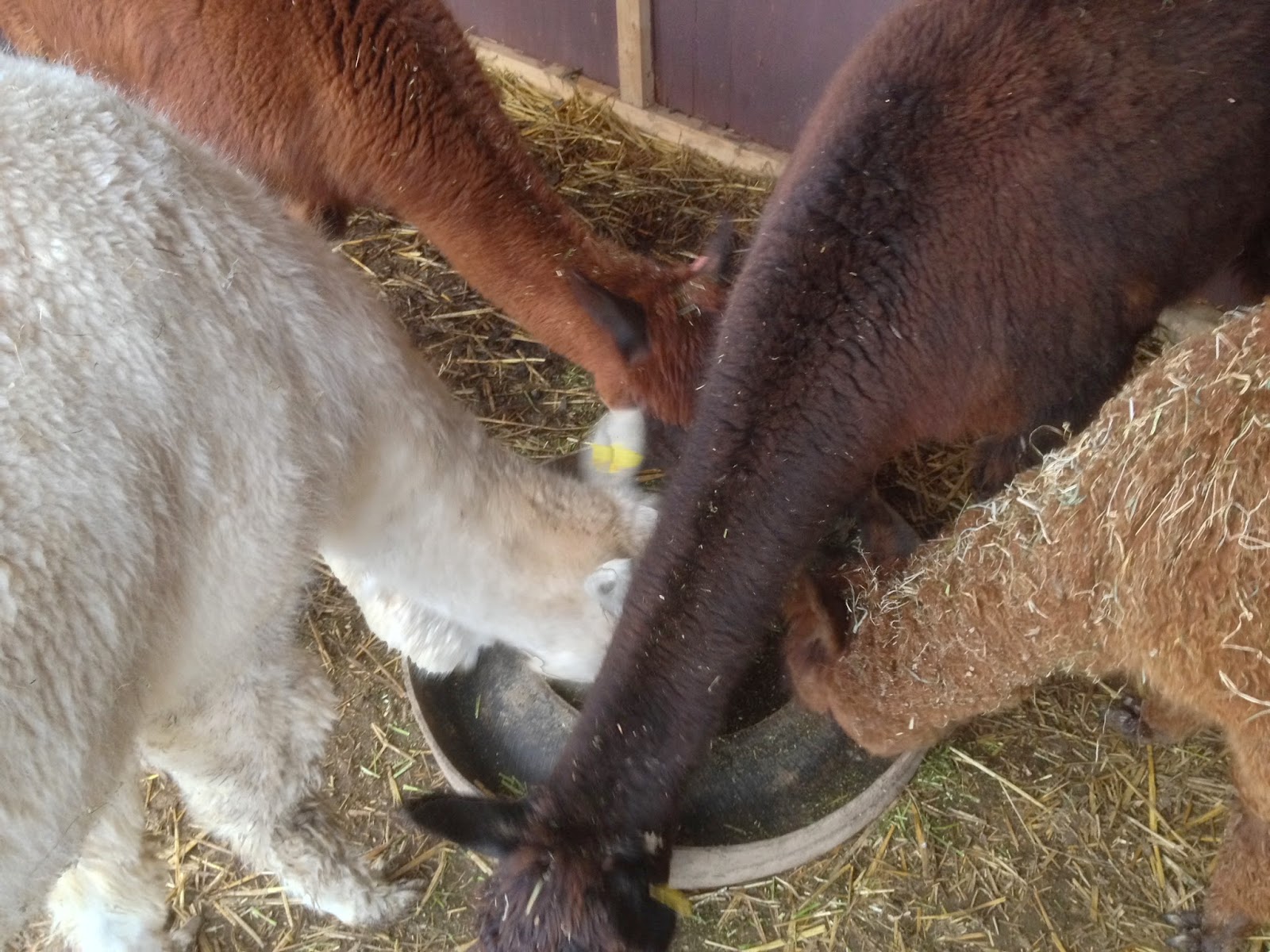 All five live together and feeding time is a frenzy of long necks and bobbing heads.

First up is Daffodil 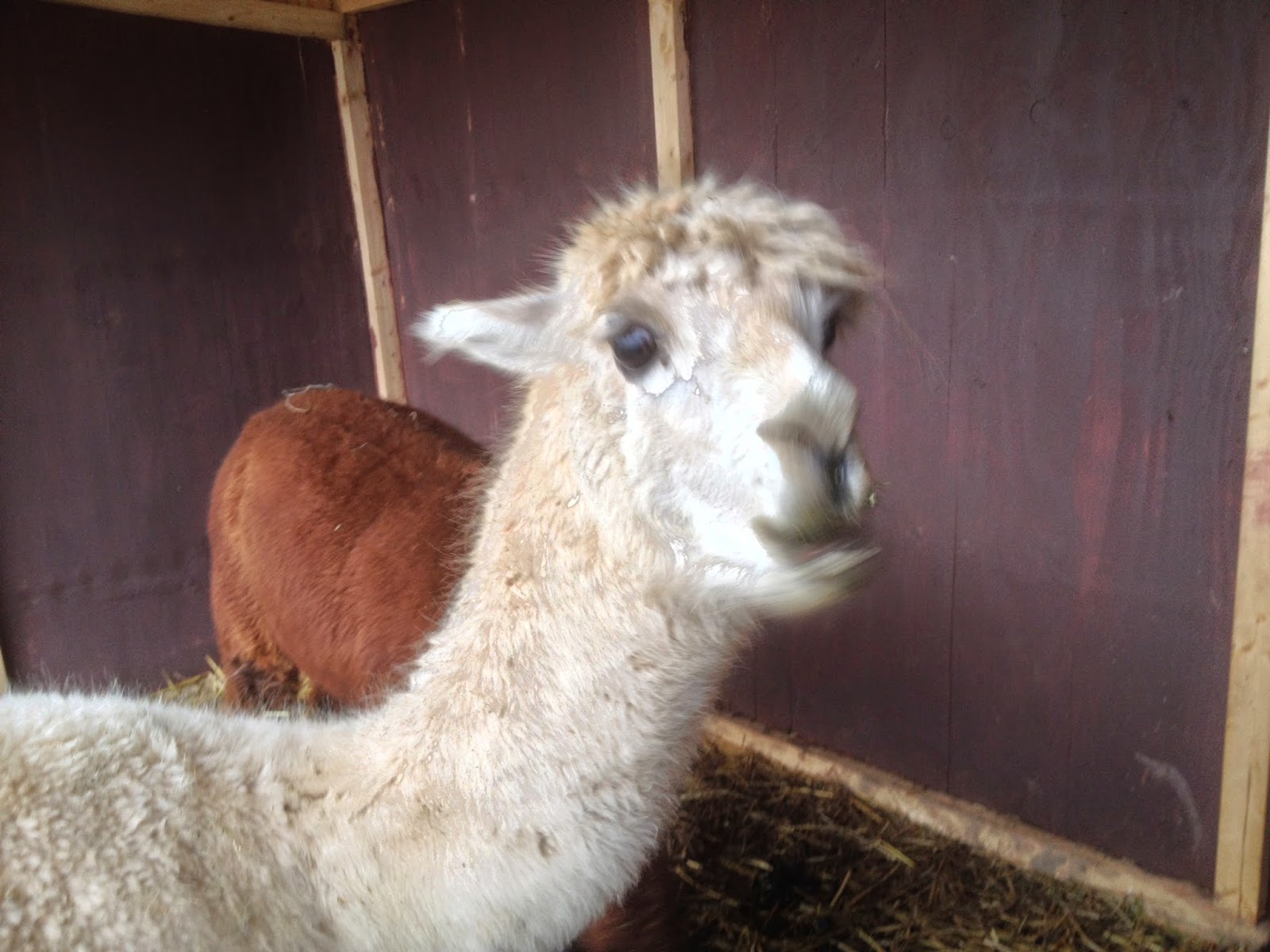 Daffodil is the matriarch of the herd and keeps everyone in order, she is light beige in colour and is the tallest of the females, Daffodil is 7 years old and is pregnant her due date is 4th August, she was mated with a grey alpaca so it will be interesting to see if she produces a grey cria. I always give Daffodil a bit of room and I am careful not to stand behind her, she is friendly but one day I got kicked in the stomach by her hind leg so its made me a bit cautious of her. 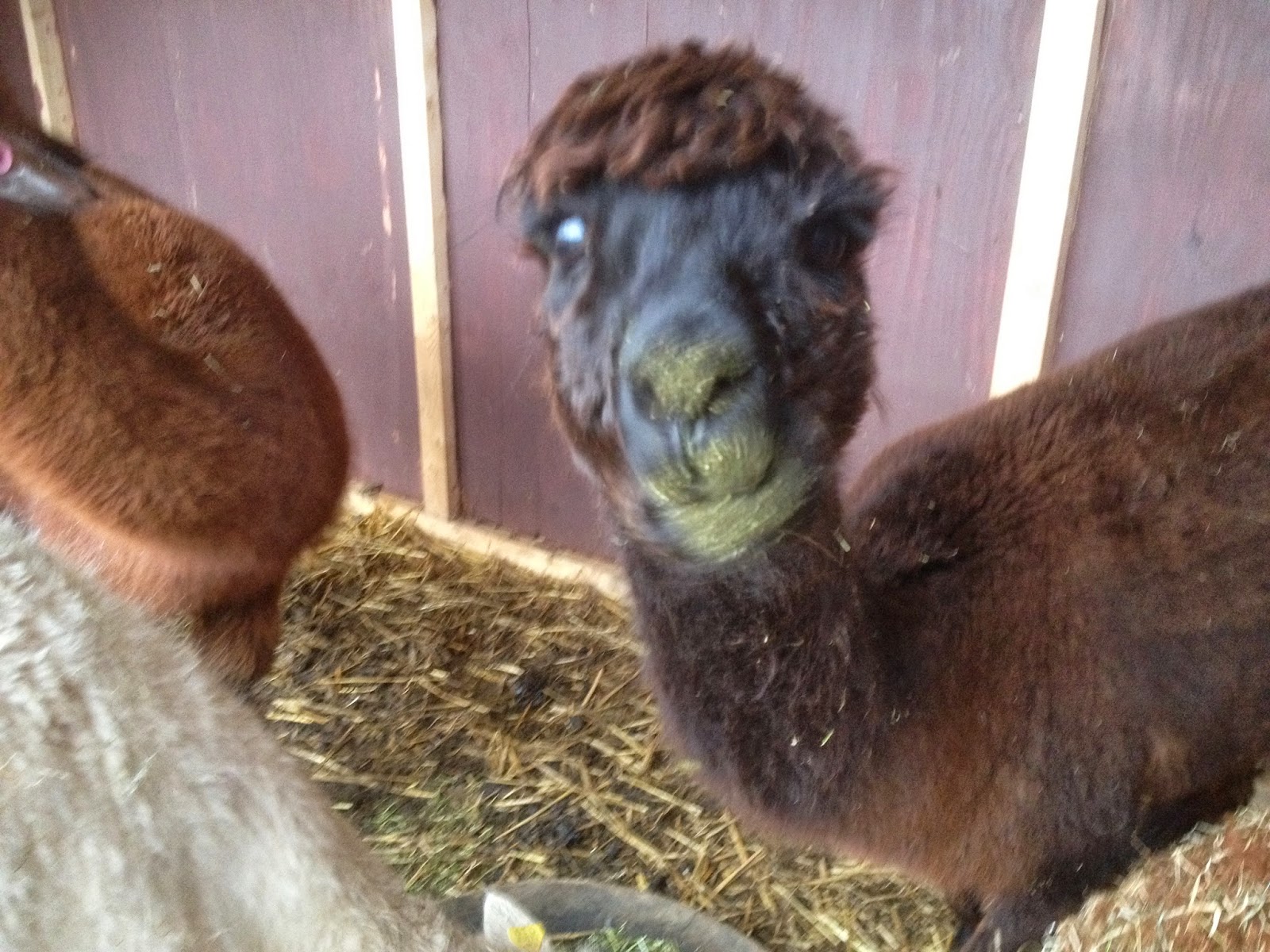 Daisy is dark brown and is almost 5 years old, she is now in her second pregnancy and is due 24th June, she is still very slim and don't know for sure if her pregnancy has followed through, we will find out in June, Daisy is very friendly and vocal making lots of noise while she is eating. 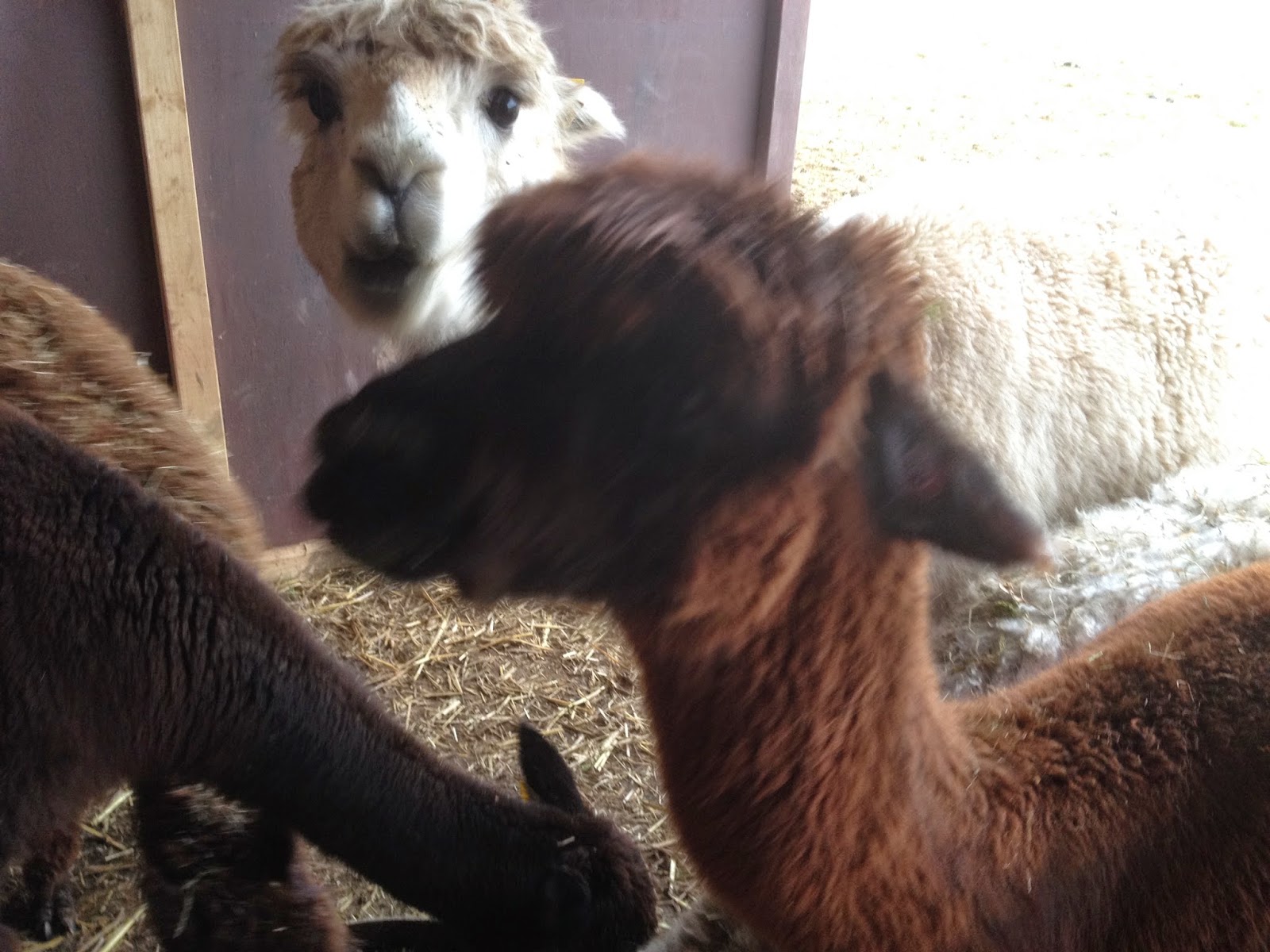 Janine is mid brown and is 3 yeas old, she is the same build as Daisy she is also very slim and is suppose to be pregnant and is due 18th of August, she has been mated to the same sire as Daffodil, her father was also a grey, Janine is always in front of the feeding line, she is very friendly and usually has her nose in the bucket before I have poured the food out. 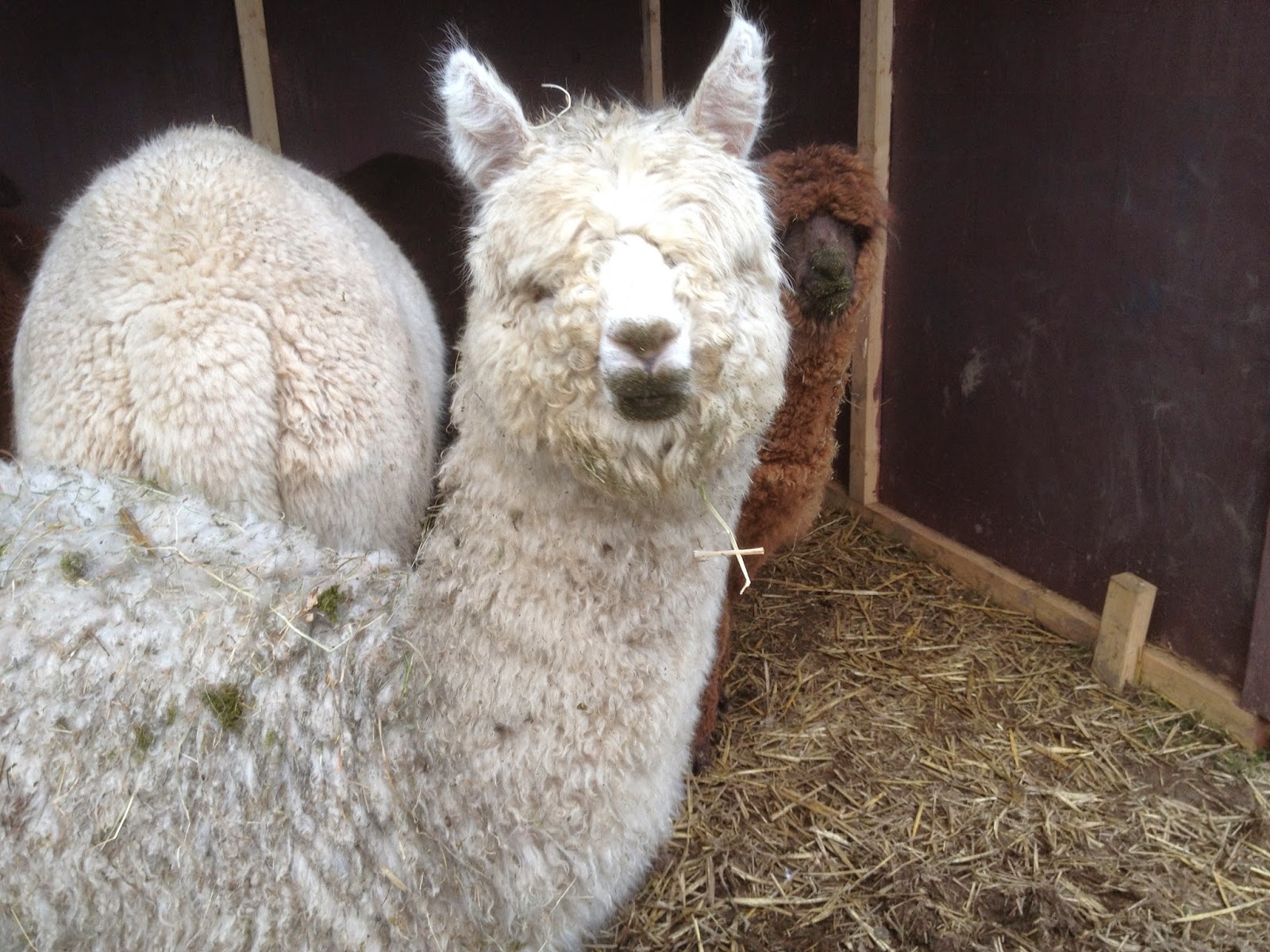 Imogen is 9 months old her mother is Daisy (dark brown) her father was dark fawn, Imogen is classed as solid beige, she is a mucky pup and is always covered in bits of grass and hay, she needs her fringe trimmed, Martin calls her meme as that is the noise she makes, she is a very vocal youngster. 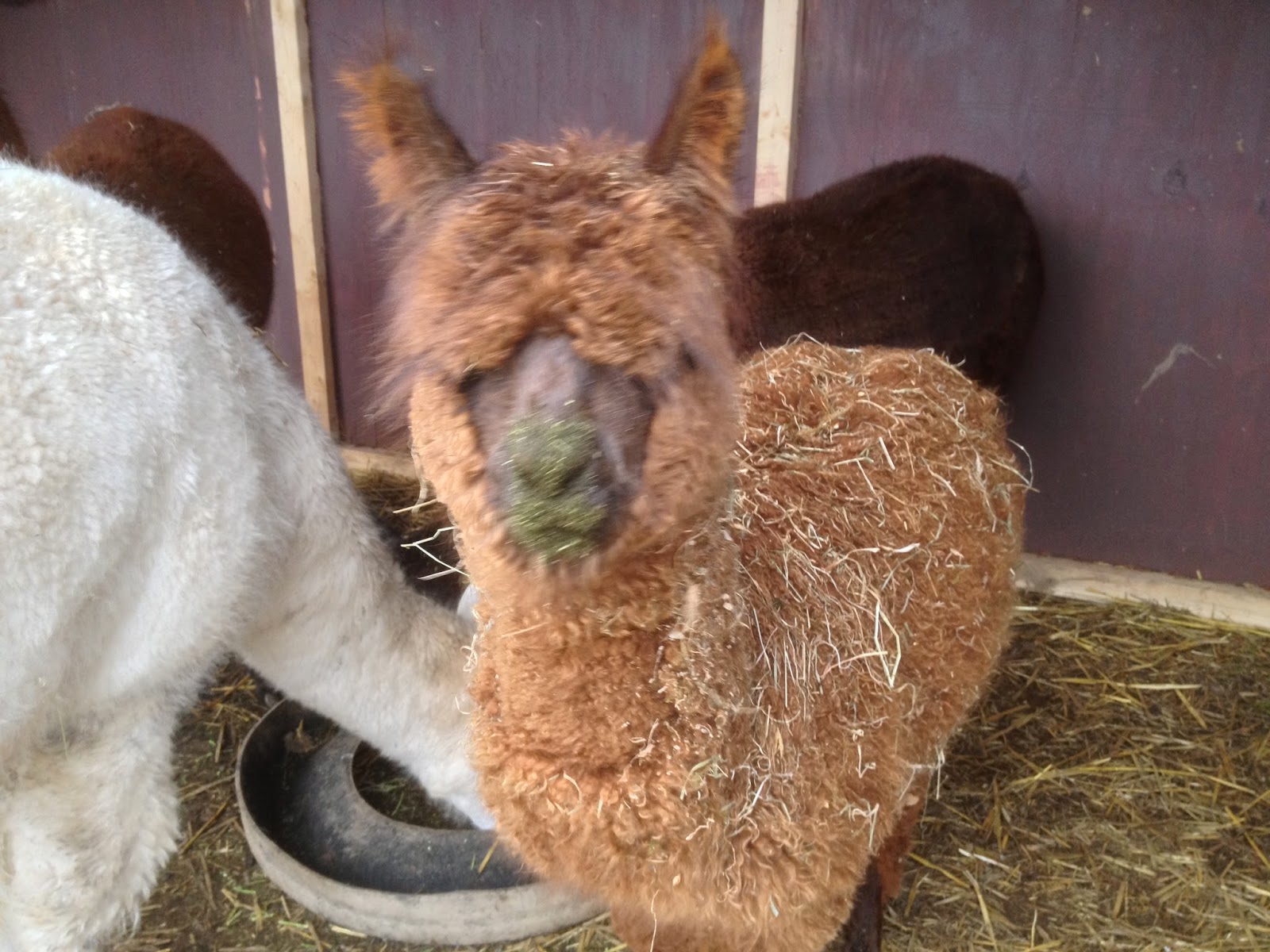 Liberty is 8 months old, her mother is Janine (mid brown) and her father is a mid fawn, like Imogen she is also a mucky pup and covered in hay most of the time, Liberty has a real cute factor about her, she is becoming more assertive over food although she tends to hold back more.

So that's the five girls, the youngsters will be weaned from there mums later this month and next year late spring early summer they will be mated probably with Niknack. The adults will be given the year off and mated the following year. Alpacas carry for 12 months, they don't have a mating season they come into season through the act of mating, we don't want young born in winter so we will plan any mating for late spring early summer, 2 weeks after mating you can test to see if the mating was successful, you bring the male back in to the female and if she spits at him she is pregnant, its called a spit off. They generally give birth very early in the morning just before sunrise, cria have to be on there feet within a couple of hours and must feed as soon as possible to survive, it is very unusual for Alpacas to have twins,  We are keeping Alpacas for there fleeces, shearing will take place late spring and this year we will have 2 kid fleeces, the first shearing produces a very fine yarn.
At shearing time they will also have there teeth ground down, in the wild they browse on lots of bushes and lower branches of trees that helps to keep the teeth ground down, they only have teeth on the bottom jaw, the top jaw is just a hard plate.

I hope you have enjoyed meeting the ladies :-)
pop along to Amy's blog here and see the other Five On Friday's

Email ThisBlogThis!Share to TwitterShare to FacebookShare to Pinterest
Labels: Alpacas, Five On Friday