All set for Shearing

Just as Martin was getting ready to go back for the week the team who are coming to shear the alpacas text me to say they are coming tomorrow, Martin has had to stay on an extra night as we needed to get the alpacas in and ready for tomorrow.
With the help of our lovely neighbours C senior and C junior we now have them under cover and penned 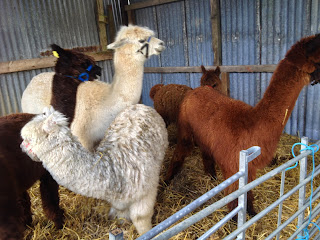 The big problem was none of the girls or babies have been halter trained and wont walk on a lead, the babies were moved first, with a bit of bucking and pulling and cajoling from us, we then went on to adult females Daisy wanted none of it and threw herself around at the end of a
the lead.
Eventually they were all reunited and the babies were overjoyed to see there mums again 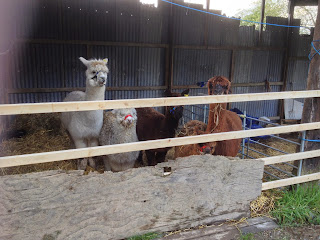 The boys wont be as much trouble to move as they will walk on a lead, {she says keeping everything crossed} The shearers have just phoned to confirm so we are all set, we need to keep them under cover so they will stay dry over night.
So tomorrow we will have pipe cleaner alpacas :-)
Posted by Dawn at 12:05:00