Now the edible garden stuff is all on the way its time I diverted my attention to the pretty things in the garden, I guessed something was up 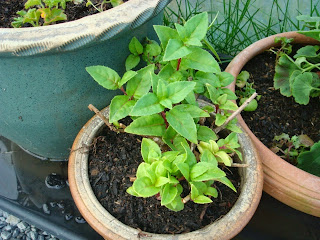 one overwintered fuchsia coming along great 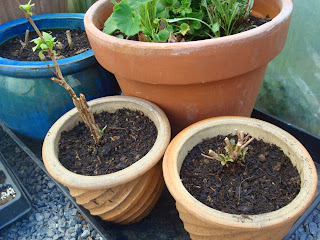 These two were struggling, I have overwintered these fuchsia's and geraniums for years, a few weeks back I was putting the slow growth down to being in a different area, but some plants were fine others were really not doing much, so it was time to tip out the pots and re-pot into fresh compost, on tipping them out as I guessed this is what I found 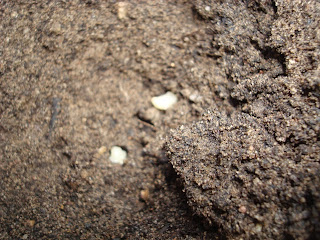 an you see those white things 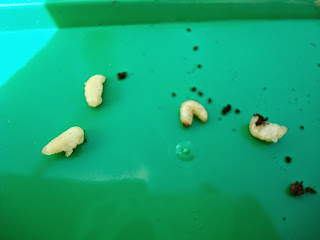 here is a close up of them
Vine weevil grubs that is what they are, I went through every pot I had with overwintering plants, Lillie's, Canna's, Geraniums, Fuchsia's, Dahlia's and my Banana plant that was also looking sickly, every pot had the grubs, the afternoon has been spent re-potting everything into fresh compost and every grub has been squashed.
Then I spied this 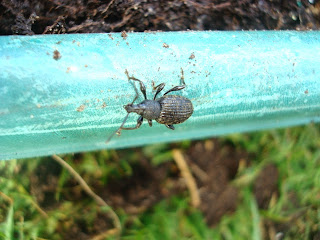 An adult vine weevil, it got squashed as well.
Vine weevils are nocturnal, the adults crawl up the sides of pots and lay there eggs in the compost, the young hatch out feed on the roots of the plants then pupate and leave the compost head off down the pot in search of a mate and start all over again, vine weevil were in abundance were we lived before and each year I had to treat the pots with pravado, last year with the move they didn't get done hence the problem.
While going through the pots I came across this fella 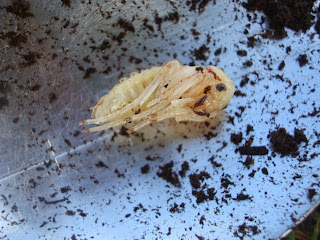 he was about an inch long, I think he may be a chaffer beetle grub, we had loads of them as well, they use to hatch out in May massive big flying beetles they would bang into things. He went on the bird table for some-ones dinner.

I had another couple of shrubs arrive today 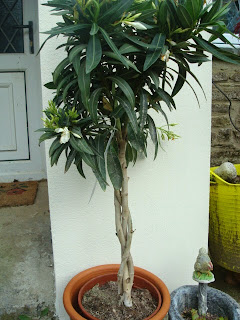 A pair of plaited stem white Oleanders they will be potted up into half barrels to stand each side of the porch.

Other news, the duckling that was hatching out the wrong end of the egg 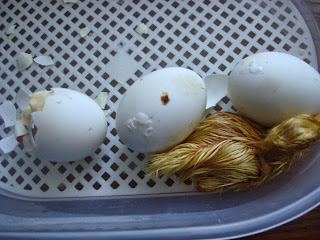 hatched out, the third one hatched today and the last one is still on its way, you can see the eggs pipping in the photo, so we have 3 and fingers crossed number 4 will be with us for tomorrow.
Mrs hen is still sitting tight on her two eggs.
another 12 days I think and hopefully she will have a couple of chicks.
I bought some Tagetes plants at the week end 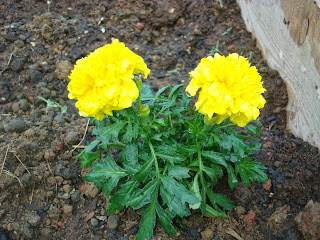