One Job leads To Another

Today has been very much a day of lots of one job leads to another,
It all started with Odd Job and Girls, when I was doing the rounds this morning, the girls needed a bit of extra grazing, so I moved all the sheep hurdles down and made them an area outside there gate that they could go and munch, I was looking at moving them into there original paddock this week end but Odd Job is being a piggy and munching his way through any grass growing and expanding his waist in the process, I then decided to cordon off half of the paddock he is in 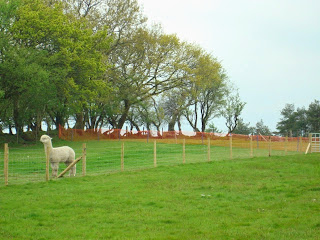 I ran snow netting as a barrier across the field, that's the orange stuff you can see in the photo, this will give the grass a chance to grow in readiness for the pregnant girls to move back in there.
Of course the snow netting was being used to divide up the duck area, so I went there to remove it and noticed the electric fence had run out of charge, we use big lorry batteries and they are really heavy to move I then had a brain wave 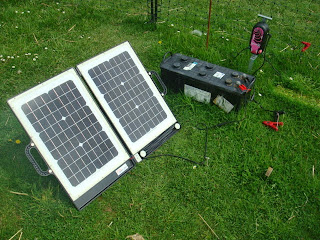 I hooked up the portable solar panel and it started charging up the battery, why I never thought of this before I don't know.
as I had taken down the barrier in the duck enclosure I then moved the duck house, then I noticed wood laying around and other stuff so ended up doing a big tidy up, stacking up all the bits of wood, tidying up the plant pots behind the greenhouse and tying all the canes together, getting troughs for carrots as I spotted them behind the shed, I knocked up a loaf of bread when I popped in for a cuppa, walked the dogs up the drive to check for post, played ball with them in the field, filled the log basket, washed the dishes made the bed up after it was stripped to be washed, emptied bins and then gave the fridge a good clean out,  watered the poly tunnel, put some lily bulbs into the flower border and planted out some of the young lupins, I feel like I have 100 miles and not stopped all day.
Off to Bluith Wells tomorrow to the Small Holders show :-)
Posted by Dawn at 10:26:00