After attempting to chip up the brush from the hedges with my garden shredder we looked at hiring a large one so we could get the job done, it was going to cost £100 to hire one for the week end, then Martin spotted this on e-bay 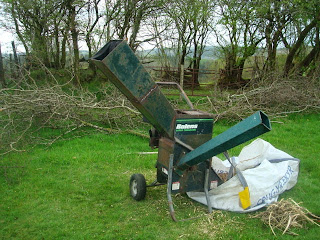 It was in our area as well and we won it for £113, it may be old but it works and being petrol driven we can run it down the field, we have spent most of the afternoon chipping away and are now making headway on the brush.
Between April and September we are not suppose to have any fires outdoors here because of the Forest that surrounds us, and burning all that brush is such as waste when I can use it as a mulch in the garden.

Today was the day we also moved the hen house into there new buzzard proof area. 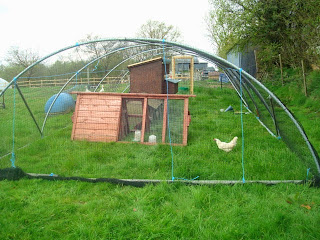 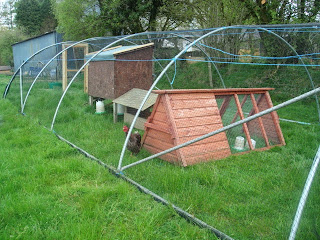 The 30ft poly tunnel frame that Martin picked up off e-bay again has been netted, I moved the broody chook who only has two eggs to sit on into the small house and run, and Martin re-felted and did some repairs on the big hen hen house I can now look at getting some more chickens to replace the ones we lost to buzzards.
The great thing is we can move this frame around as well when they need to move onto fresh ground.

Now I just need to sort out the duck area, they are going to be shifted on to some fresh ground and I will continue to use the electric fencing around them.
Posted by Dawn at 10:51:00