It All Started At 4pm

I was having such a lovely day it was going along swimmingly then at
4 o'clock it turned into chaos
I went into the barn to get the animal feeds it was time for the feeding rounds, there was a loud buzzing noise that should not have been there,
the bees had swarmed and were settling themselves in the barn, there was bees everywhere, Sol didn't venture in he lay outside and watched, I had only been in the barn about an hour before hand.

I got together every ones feed and did the rounds, the bees looked like they were setting up home in one of the empty hives so they could wait until Martin is back tomorrow evening as the hive is up on a platform and I cant get it down full of bees by myself.
Animals all fed I had a look down at the hives and there was another swarm but they were moving into an empty hive down there so that is OK.
Next on my list was to get the young ducks moved into larger quarters, I started sorting it all out then there was a commotion with the Alpacas, I could see Odd Job trying to get over the fence into the girls paddock, I ran down there chased him off the fence, he then went back again of course the girls all lined up along the joining fence tormenting him, I had to separate them but how.
I decided to improvise and put together another fence creating a 10ft divide between the girls and Odd Job fields, I gathered together hurdles but still had a gap I new were so long lengths of timber were but they were screwed to the pillars in the other barn went to get the drill fro the first barn battled through the bees that were settling on the tools got the drill took down the wood filled the gap alpacas now all quiet and settled. 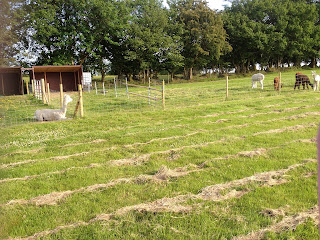 walking back up the field to carry on with the ducks Lambert was creating a racket went to see what he was doing, he had smashed his water bucket up and his head was jammed in his bucket, he got himself free 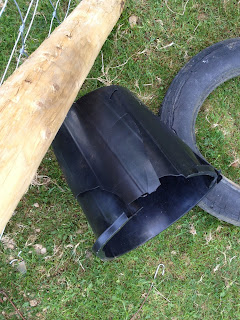 I went to get him another water container when I got back I noticed he had cut his head and was covered in flies, off to get the purple spray that was were yep you guessed it in the barn with bee swarm, retrieved spray and sprayed Lambert's head 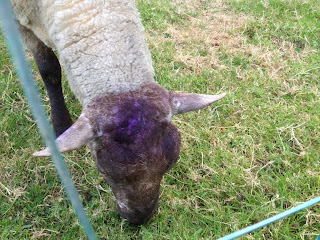 The lid wasn't on the spray properly and I got covered in it, 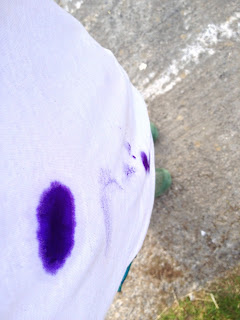 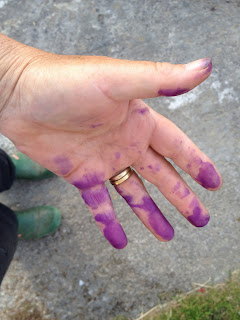 I really needed to finish sorting out the ducks finally got it done, moved them in 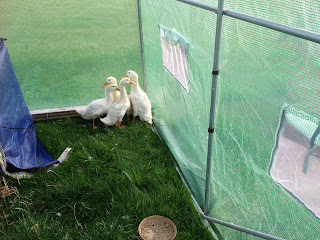 cleaned out there old house while I was at it and cleaned out the adult ducks as well, saved me a job for tomorrow.
Got back indoors at 8pm after 4 hours of chaos all I want is a cup of tea and a shower.
And I was going to show you how well the chickpeas and lentils are doing that will be tomorrow :-)