The recipe I should have really posted it yesterday but didn't think anyone would be that interested.

Grate the courgettes and leave in a sieve or colander over a bowl for a couple of hours for the water to come out, then give them a good squeeze
Chop onions and fry in a little oil until soft.
In a bowl mix the courgette with the onions, the beaten egg, tablespoon of curry paste, tablespoon of chutney and whatever seasoning you are going for about a tablespoon again, start adding flour spoonful at a time mixing as you go you want a thick splodge consistence 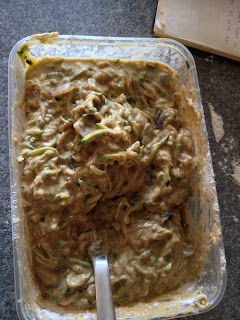 heat your oil in a pan for deep frying, when it is hot a tablespoons of the mixture to the oil I do 3-4 at a time fry until golden brown 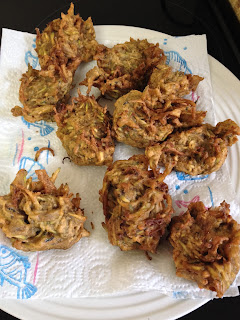 when cold you can freeze and re-heat in the oven
They are not true Bhajis but its a great use for courgettes and they are really tasty. 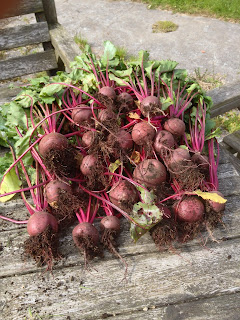 I harvested some beetroot a nice haul these are thinnings there are still more to come, tomorrows job is to get them boiled up. 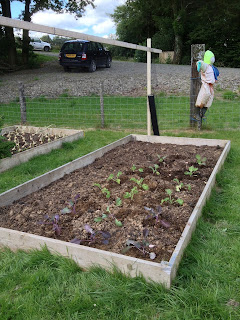 I built a frame across one of the beds and fixed netting for peas, got the peas sowed and planted out some Kale, broccoli and sprouts, I also sowed some more beetroot spinach and chard in one of the beds were there was some space from crops that have been harvested. 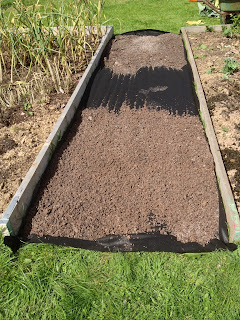 Made a start on a cinder path between the raised beds, just weed membrane and the cinders and ash from the Rayburn are then added to the top, I did the same for a path in the poly tunnel, over time I will get all the areas around the raised beds done it beats buying in gravel and makes use of the ash and cinders pile 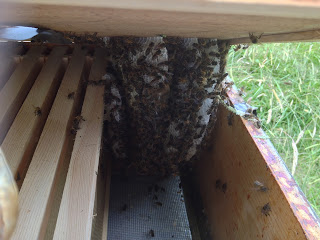 I checked on the bee hives, we had an empty hive sitting in the apiary, I noticed some activity around it and upon investigation found a swarm had set up in there, but instead of using the frames that were in the hive they have built there own comb in the space were frames were missing, I will have to move the comb onto frames when we get our next fine day.
Martin is not home this week-end he has an open day at the fire station tomorrow, it seems like its been a long week so far, we have friends coming to stay next week end.
All that's left to do today is walk the dog shut everyone in for the night have dinner I have a curry in the oven.