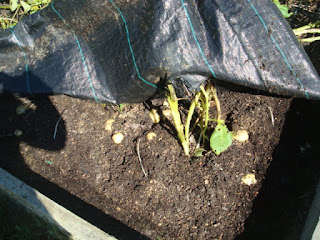 Making the most of the lovely sunshine today it was time to get the potatoes up that were grown under the membrane, the foliage was dying back and I needed to get them up and into the sunshine to dry off before they went into storage 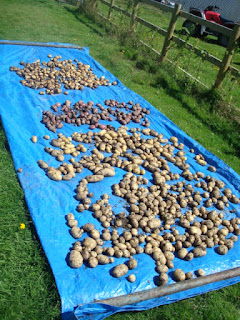 We had a great harvest 108lbs in total more than enough to keep us in potatoes, after sending the day in the sunshine I got them into paper sacks the smaller potatoes will be used first and they are in a bucket in the porch, some of the potatoes I will keep for seed potatoes to be planted next spring, the only ones I intend to buy in are the heritage blue ones I had at Kev's for lunch the other day. 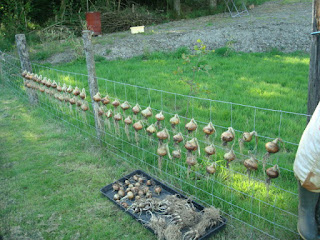 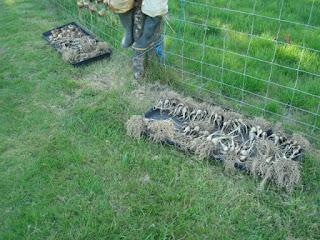 Also the last of the shallots are up
Onions shallots garlic and potatoes have done really well and we have more than enough to see us through to the next harvest.
I picked another basket of peas and french beans several courgettes the glut is easing but now we have a glut of cucumbers picked six today and Martin picked 4 while I was away, looks like there will be another dozen ready next week.
We set up a new run for the ducks today, they run they had was far to big and becoming overgrown, it was an enclosure made from 50m of electric netting, we have swapped it with a 25m of electric netting, the larger enclosure we are setting up for the Turkeys as they are starting to outgrow there space. Alpacas have all been moving to fresh paddocks as well. Young chickens have been moved into the main chicken house tonight, hopefully after a night together they should get on OK tomorrow, the young chickens run has been inside the big run so its not like they don't know each other, I prefer to introduce new chickens at night they seem to settle better after spending a night together in the dark.
That's everything up to date again Martin is off walking Sol, I am going to hit the shower before they get back and settle down with a book.