Home Again After My Trip

Nothing beats getting home after after a trip away, I went up to Leicestershire to spend a couple of days wit my daughter and grandchildren and for a visit to the Quilt Festival at the NEC.
On the way I stopped for lunch at the home of Kev and his family from An English Homestead
A really lovely family two smashing little girls, A lovely home produced lunch and a tour of the Homestead, Kev has many projects on the go and juggles so much, I don't envy him at all.
My daughter and me had a great day out at the Quilt festival, I was meeting with a friend there as well, there was so much to see. 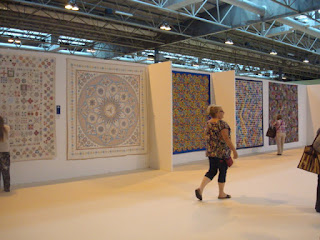 Here is just one photo I will pop the others on my craft blog. 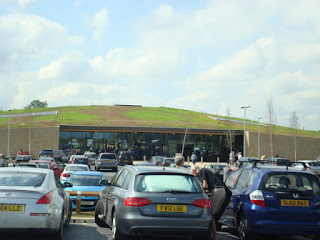 On the way home I stopped at this service station on the south side of the M5, it had only been opened by Prince Charles last week, the north side has been open for a few months, I saw the north side on Country file a few weeks back, they are environmentally friendly services using natural resources where they can and the food they serve is all locally produced, there is also a farm shop selling local produce, no arcade games or take always and no shops selling selling tacky goods its not owned by a chain either, the roof of the building has grass and wildflowers growing on it and over time the building will blend in with the local countryside, it was a real pleasure to visit. 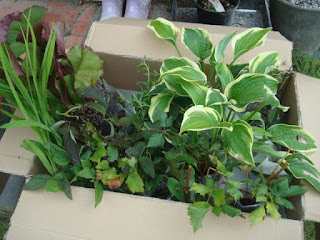 I got home to a new box of plants for the garden more on that later. After greeting Sol and making a fuss of him, its the first time I have been away from him it was down to see our new arrival 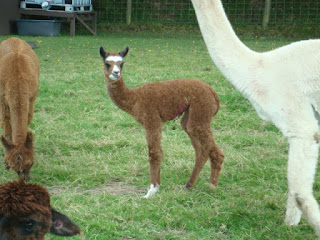 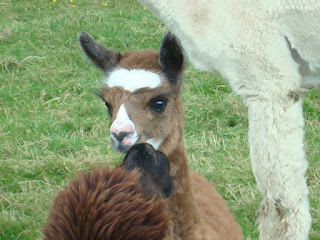 She has been fully accepted into the herd and her aunties look out for her.
We have named her Kara, I have been thinking for the past few weeks if our new Cria is dark coloured and female that is what I would call her. I will try and do a video of her in a day or so.
Right off to see what you have all been up to while I have been away.