Bee Hives Have Been Attacked

As we ave another glorious day I had planned a trip down to the bee hives, firstly see if everything is OK, secondly see if there was a couple of frames of honey to steal, 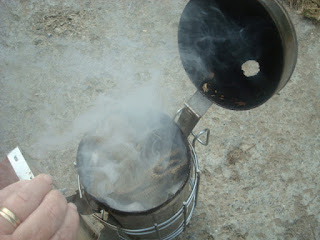 I lit the smoker in readiness, put my suit on tool check 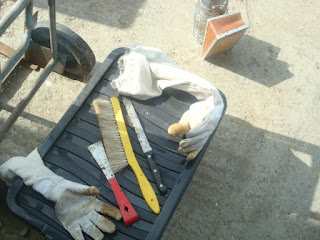 Hive tool, bee brush and old bread knife for the top bar hives
put some spare frames into the box with my gloves 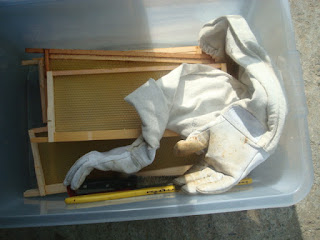 off we went Sol and me
upon approaching I could see lots of flying activity around the five hives
I wanted to sort out the biggest of the swarm hives as it had got in a muddle with brooder frames and store frames as an excluder wasn't put in oops and the queen had be laying all over the place, a few weeks ago I tried tidying it but trying to get 18 frames with brood into a space that only takes 12 things were still in a bit of a jumble. 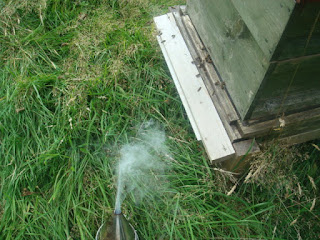 I smoked the hive, if I am doing an inspection I don't usually smoke the hive but if I am going to be there some time or doing anything to upset them I give a bit of smoke to quieten them.
I opened the hive and had a sort through frames, now all in order, the brood is all in the bottom and the stores are in the top supers, out of all the frames of honey there wasn't a single one totally capped off, if they are not capped off there is too much moisture in the honey and it will just ferment if you try and store it, I think with the past month of damp weather they haven't been able to reduce the humidity in the store frames, I will check again next week and perhaps after this dry spell they might have capped some frames off.
Anyway moved to the next hive, things flying about but as I got closer I realised it wasn't bees flying in and out of the hive it was WASPS, I yanked the lid off and there a hive of dead bees and the wasps having a field day, I closed it up, closed the door on it so the wasps are stuck inside, went to the next hive and wasps again 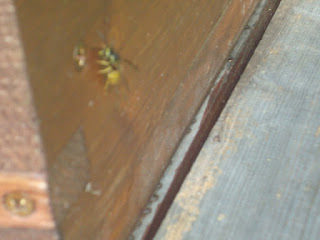 Again I closed up the hive and retreated, we need to get a bonfire going and clean down the frames and throw all the contents on the fire, dead bees dead wasps.
This is the time of year that wasps attacked bee hives late summer early autumn, its the two small colonies they have wiped out, the three big ones are fine. Wasps can sting many times a bee only once so a small colony doesn't stand a chance.
As well as playing Bee Keeper I did get into the vegetable garden 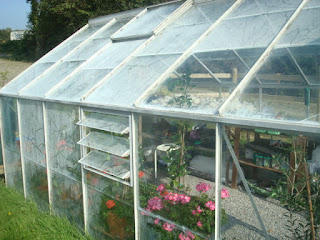 I got the cool glass wiped off the greenhouse, time to get as much light as possible int the green house 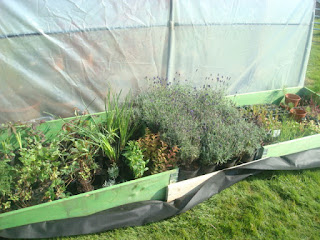 put together a holding area for all plants in pots waiting for a home, it saves them getting blown about makes it easier to water and keeps the together in one place, I have used a couple of the pallet collars and next year I could turn them into cold frames. 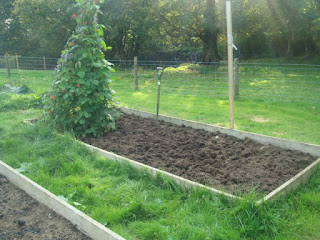 cleared out the old peas and french beans, only the runner beans here now 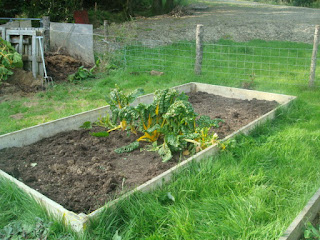 cleared out the last of the beetroot there is only Swiss chard left in this bed. 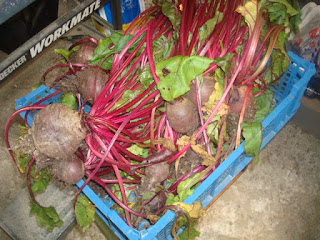 harvested the last of the outside beetroot 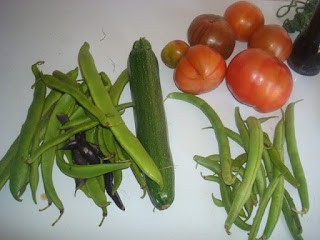 Harvested some runner beans they will go in the freezer, last of the french beans one lonely courgette, more tomatoes 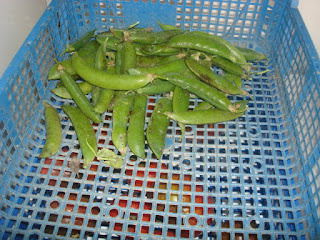 last of the peas from the first sowing, there is enough here to have with my dinner tonight 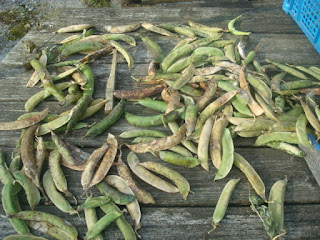 The remainder of the peas are being dried out for next years sowing.
We have had a good pea harvest this year and the second late sowing is coming on well so you never know we may just get another crop this year. :-)