Visitors went home yesterday, now I am getting back to normal after a hectic week and noisy, when you are used to just silence it can seem very loud with children around.
It was lovely to see them all and see them enjoying our space and an opportunity to catch up on what they have been up to.
First on the list of today's chores was the goats, there has been a bit of lameness, this was becoming a problem to try and treat as I could not get near them and there was no were to enclose them, there paddock was too big an area to try and catch them.
So I came up with a plan, as it was going to be raining this morning and goats don't like the rain they would be in there shelter, so Martin ventured out and with a tall sheep hurdle snuck up and trapped them in there shelter,
Next they were moved in there shelter with the forks on the tractor and re-homed in one of the bays in the side barn. 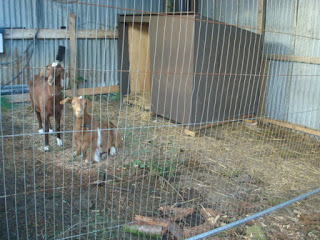 this has all gone as intended, and now I can handle them and treat there feet. 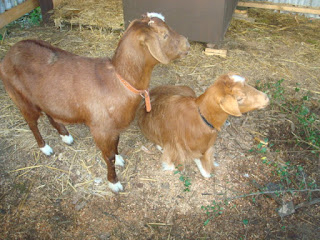 As you can see Thelma has lost her horn, I don't know how, when I went to feed them the other day her horn was laying in the shelter, the kids have taken it home along with pine cones, shells, a sheep's jaw bone and the trimmings off next doors horses hoofs.
I don't like keeping animals confined but sometimes needs must, I will take the opportunity of having them confined to do lots of handling grooming and lead training, when they released  which wont be for a good few weeks hopefully they will be more tolerant of being handled.
Tomorrow will be the start of there new regime.
Tomorrow we also have some work to do with the Alpacas, I have a batch of injections to give them and some of those need nail trimming as well.
The clocks are changing tonight, I have been slowly altering animal feed times to take the time change into account, that is the only problem with having a routine, they let you know when its feed time and they don't like sudden changes to routine.  Mind you neither do I.