Still making the most of this glorious weather,
I got clearing the Asparagus ferns from the bed gave it a good weeding and ruffled up the surface
being careful not to damage the roots of the Asparagus roots 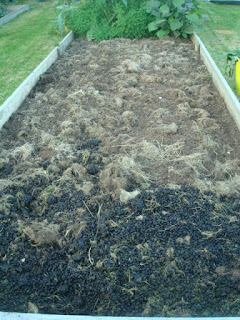 Its now getting top dressed with Alpaca poo, at the far end of the bed the Oca are growing, they have been earthed up, this is the time of year they start building up there tubers and it will be a while yet until they are harvested, there is also some Yacon growing down that end as well, along with Globe Artichokes and Jerusalem Artichokes. 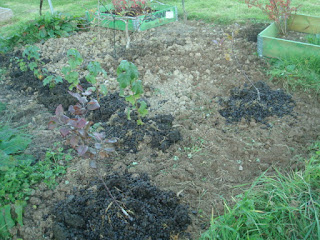 I have been doing more weed clearing around the fruit bushes and top dressing them with poo as well, the blackcurrant cuttings I took late spring have come on really well. 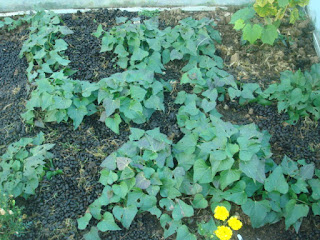 In the poly tunnel the sweet potatoes are putting on lots of growth the vines are spreading there were also given a top dressing of poo and a good watering, they will also be building up tubers so they will need plenty of moisture. 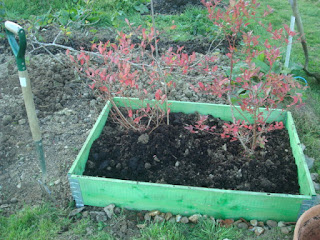 Back out in the fruit garden, I am using some of the pallet collars to make ericasious beds, I got a couple of Blueberries planted into this one, I have another two bushes to get out of pots yet, less pots to water next year will be good, I have a Cranberry plant I want to get into this bed too, I have had my cranberry for a few years and each year I managed to get enough fruit for a small jar jar of cranberry jelly, there is only me that eats it.

Right I will have to dash, came across a box of hair dye in the cupboard, back from my shop working days, so decided to put it to use, time to wash it off now. :-)
Posted by Dawn at 13:53:00