A Weekend Of Progress 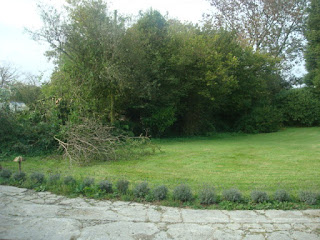 Before from inside the garden 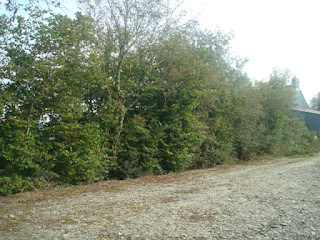 View from down the drive house is obscured 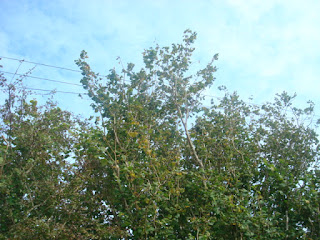 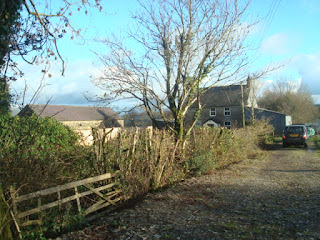 While I was out doing a craft fair, Martin his brother and girlfriend got the hedge down to a manageable height, we have left an Oak and two Ash trees in the hedge line, the rest of the hedge is made up from, Hazelnut, Hawthorn, Holly and Blackthorn, it will take a couple of years to get it all thickened up and shaped but wow what a big difference it makes, they worked all day at it through, snow sleet and hail and biting winds.
Unfortunately because of the weather yesterday the plans for re-roofing the utility room were put on hold.
Today we had blue sky and sunshine and no wind, our visitors were leaving this morning to do a bit of sight seeing on the way home, I packed them up some snacks and a flask.
Martin made a start on the utility room roof as the weather was perfect 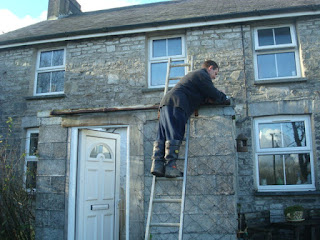 The roof consisted of corrugated sheeting 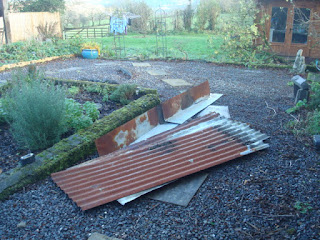 Which leaked like a sieve, he now has the roof all boarded and covered in roofing felt, hopefully it will now be watertight, although this is just a temporary measure to see us through until we re-build the utility room.
While he was doing that I was washing floors and shampooing the living room carpet, I have been wanting to freshen it up for a while now and waited until today, after having two dogs with muddy paws this week end the carpet needed it.
Last week after squeezing the lamb in the freezer and giving a couple of cockerels a few weeks reprieve until some space could be made, the last thing I wanted was more meat 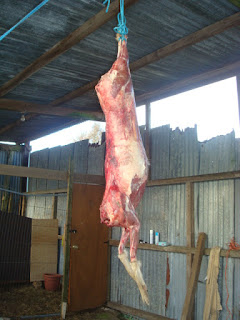 Look what Martin brought home
A deer, he gutted and skinned it with his brother yesterday, its hanging in the barn waiting to be butchered, tomorrows job.
I think it will be venison for dinner tomorrow, and I will have to have a sort through the freezers to see if I can make space for the rest of it.
Last night we had a lovely roast of lamb, with curly kale from the garden and roasted Oca and Sweet Potatoes from the garden,
It was really tasty unfortunately I didn't get, round to taking a photo
the kale was really lovely all the better for being frosted.
I still have a bag of it in the fridge and will use with venison tomorrow.
The craft fair went well, I sold out of a lot of lines I wont be re-doing them before Christmas as I only have one small fair to do now, I did also pick up some more orders yesterday,
I now have enough money put by from craft fairs for my fruit cage that I will order in the new year.
I have just lit the fire Martin is walking Sol we are having a nice quiet evening sat with our feet up.