This morning when Martin went out to feed the Alpacas he found Liberty had died during the night,
Losing two of our girls in a week is very sad news 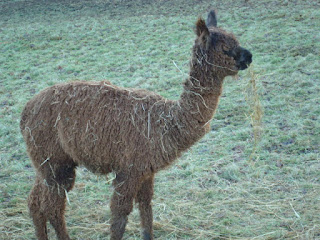 Liberty has always been a friendly character and is the first to greet you at feed time, it was a real shock, she was fine yesterday, being her usual boisterous self  running around enjoying the frozen ground, she ate and grazed with the others nothing seemed amiss, she was 18 months old.
I called the vet and arranged for a postmortem, the vet phone a little while ago so far nothing has shown up except a bleed on the brain, more tests are being run.
We have collected medication for the others and dosed them up as a precaution.

Kara is a concern and I have discussed it with the vet, although she grazes with the others she wont eat any of the mineral supplement or dried food both she needs for her well being
The other day she seemed off and I thought I was going to lose her but she picked up again.
The vet said we have to get a couple of bottles of milk down her a day she is old enough to be weaned but if she wont eat the food supplements she wont make it.
So tonight we were back trying to get her to take her milk
By torch light in the field shelter here is a short video

At last me managed to get her to take 800ml
If all goes well we will do the same twice a day tomorrow.
Its just fingers crossed that she is still with us in the morning.