A bad start to the day, Martin was doing animal feeds and came in and told me Daffodil had gone down and wouldn't get up again.
Quickly throwing on some clothes I went out to see 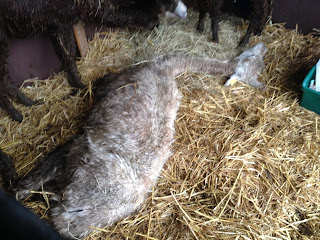 Yes she was down we tried to get her up but she just stumbled and went down again,
I got on the phone straight away to the vet 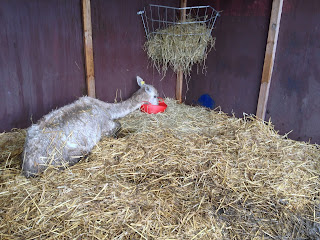 While waiting for the vet we got her upright and she wolfed down a bowl of food
The vet checked her over and cold find any thing wrong, she was eating, no temperature, her lungs were fine, gut was fine, not stressed,
all we could think of was the weather being so bad she hadn't been eating enough for herself and feeding her baby cria.
She was given a dose of glucose and calcium by injection another bowl of food
I had to collect some milk replacer to give her cria and some vitamin D injections to give all of them, may as well do them all at the same time
With the help of our neighbours C Senior and C Junior we carried Daffodil into the horse box and brought her up to the barn with Kara her Cria 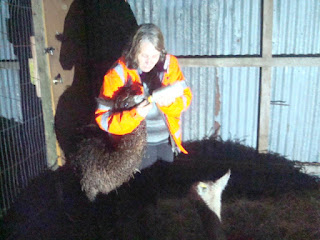 After another bowl of feed for mum and a vit D shot for the pair of them, the others I will do tomorrow, it was time to try getting some milk into Kara 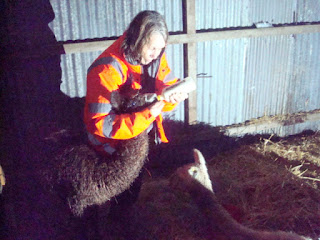 Last thing we need is a sick Cria, she is just 4 months old and has only recently tried nibbling grass
They are not usually weaned until 8 months, 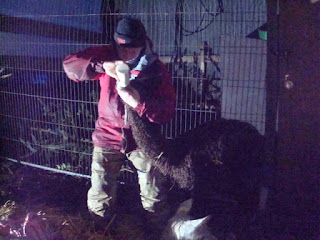 between us we managed to get some milk into her
in a few hours we will do it again, we have to keep moving daffodil so she isn't in one position too long, we also have to give her another shot of glucose and calcium later tonight.
Tomorrow if she isn't up on her feet we will have to put her in a sling and get her up
All of today's plans went out of the window, it doesn't take much to throw a day out.
Its going to a busy long night, if we cant get her to her feet again we will loose her
we really need this rain to ease up before other livestock start to suffer.