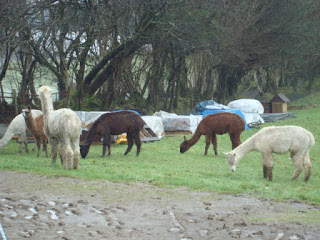 Today was a big day for the Alpacas, they have now become one herd, in the big field area we let the girls in with the boys, at the time of letting the girls out the boys were in there coral as they were getting the dose of medication that the girls got the other day, the reason for the delay was the boys were not playing fair and refusing to come in for medicine, anyhow we got them done this morning, once they saw the girls in the field they were anxious to be released 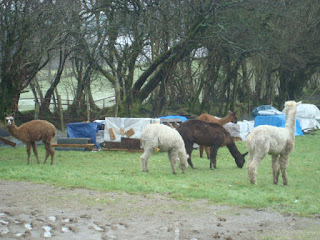 we opened the hurdles for them and the boys went galloping across the field to meet the girls properly, Daisy (self appointed herd leader) walked over to them gave them a kick and walked off,
there was no fuss or anything. 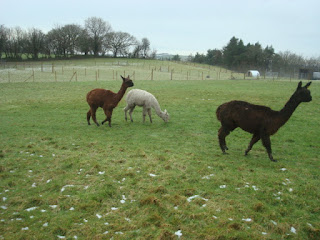 After a while Daisy led the girls away to another part of the field, when the boys decided to have a tiff this afternoon Daisy intervened between them, I think she is taking her job seriously.

We had a phone call from the vet this morning, more results in, it seems the Alpacas have picked up a sheep parasite resulting from the rain and run off from the fields at the back were sheep were grazing this year, they have been treated for that, the other thing is a bit more concerning, they also seem to have picked up a parasite from the goats, this is in its early stages still egg larvae stage 3/4 this must have come from the goat paddock were they have been grazing recently, hence the reason for moving them today, they will be getting treated for that on Monday as will the goats.
So nothing yet that cant be controlled. 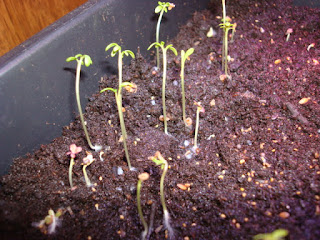 my salad leaf seedlings were starting to get a bit leggy and growing towards the window so I set up the grow lights, 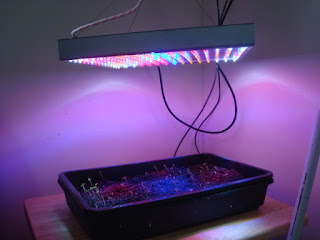 The grow light panel is full of blue red and white led bulbs, they have now straighten up again they will stay under the light panel until they are in proper leaf. 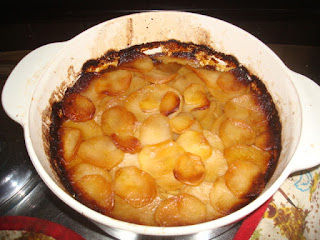 Lancashire Hotpot I added sweet potatoes to it as well, we had it with some fresh picked curly kale from the garden. 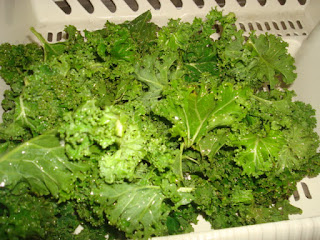 The complete meal was home produced, with our own lamb, potatoes, onions, sweet potatoes and stock, the meat and veggies were browned off in our own lard and the kale was sauteed with our own garlic and apple cider vinegar, the only thing that wasn't home produced was a bit of flour salt pepper and Worcester sauce
It was delicious

The weather today
bitterly cold, dry and wind free, we did have a lot of mist come in giving everything that ghostly appearance this afternoon.
Posted by Dawn at 12:17:00