Not much to report today,
A trip into town we had to pay the vet bills,
Pick up the next load of medicine stuff for the livestock
We then went to collect some more chicken feed and goat feed,
called into the garden centre more on that tomorrow.
When we got back I popped one the ducks in the oven that we raised for the table last year 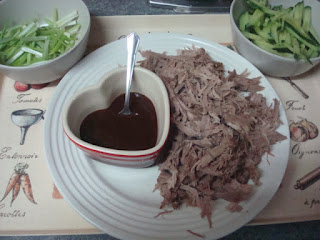 We had some of it for dinner, Martin shredded up some of the breast we had it with
cucumber and spring onions wrapped in some warmed tortilla and plum sauce 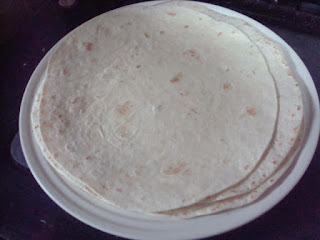 the whole meal cost us £1.10 I looked up the cost in the Chinese take away it would have been £16.60
and we wouldn't have had so much.
There is a lot of duck left so I will look out some recipes to use it,
then make some stock with the carcass,
We called into the fruit and veg wholesalers for a sack of carrots for goats and alpacas and dog cost £2.50
picked up 2 cases of apples at £1 each again they will be fed to the animals
and a case of satsumas £1 for us.
Although the carrots and apples are good enough for us to eat and we may well have a few.

Once we were back after a few jobs, we had to dose the Alpacas with there medicine
Martin got them corralled  at feed time
I think they have had enough of being man handled as they were not being cooperative
after being shoved about, spat at, drooled on and covered in mud and that was just me we were both shattered and decided to leave treating the goats until Martin comes back at the week end.
We had a good chat to the vet this morning and it seems we are not the only ones having problems with alpacas at the moment, we need about two weeks of frozen ground to break the cycle,she was saying that when we get them moved on to the new land we are buying after a year course of treatment we should be clear and free from future problems as the land is higher there will be no run offs, we can keep things under control with good paddock management, the goats though will always need treating annually for parasites.
We will ever early autumn have checks done for fluke which we are clear on at the moment.

The Weather, mild and dry with grey skies.