The hills are alive with the sound of music,
I have just been watching the Sound of Music, nothing beats belting out a good song
Its not like there is anyone to hear me up on our hill.
Its time to celebrate the start of a new year,
Its time to start putting new plans into action
First on the list for 2016 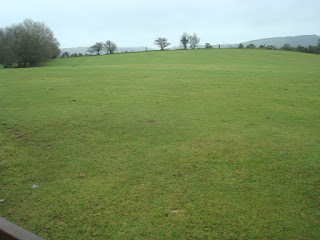 More Land in fact another 15 acres 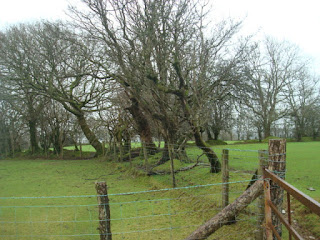 This land backs on to our land 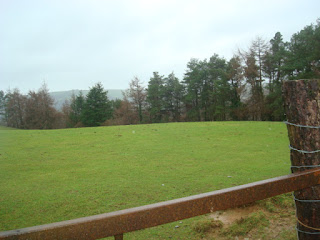 We have agreed a price to purchase the 15 acres, this will take our boundaries right up to the forest boundary at the back, these photos only show one of the fields, once we have signed the paperwork I will take you on a tour of it, jumping up from 5 acres to 20 acres seems a bit daunting, but we have plans for it, six new fields in total, one of the fields will be divided into four interlocking paddocks with a large shelter in the middle, this is were the Alpacas will all go to live together, the four paddocks will give the fresh grazing as they will be rotated round the paddocks, they will have access to the  shelter which ever paddock they are in, they will also have shelter from the weather from hedgerows in all the paddocks.
Another field will be put over to hay, one of the fields has lots of gorse, we plan to move the bee hives there, giving them lots of shelter, there are plans for the other fields,
We need to get this all tied in the next couple of months, otherwise our plans will stall.

Next on the list is the fruit cage also we have decided the greenhouse and small poly tunnel are to go,
in there place we are getting another big poly tunnel,
The new poly tunnel will house the citrus trees that will be planted into the ground
it will also house the potting benches and be used for propagation and growing from seed
also tender plants will be over wintered in the new poly tunnel.
The poly tunnel is going to be built over 4 of the raised beds, leaving only 4 out door raised beds
if in the future I need more outside growing space I can always rebuild some in another area. 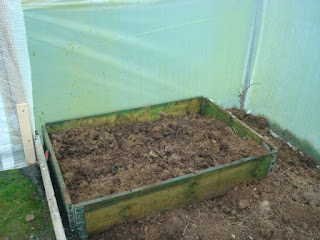 I was in the poly tunnel today, preparing a bed for some early potatoes
in a few days I will get some planted they should be ready for harvest April May time. 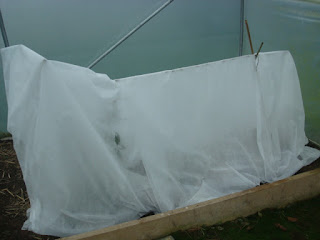 Under this ghostly looking tent 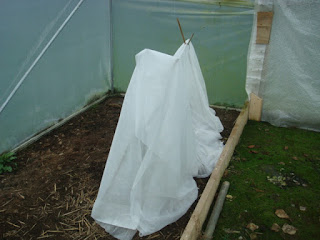 Are the Piquant Pepper plants that I grew from seed, they came from Dani over at Eco Footprint,
The plants have grown well although it was late in the year when they were started, we got a few peppers, the plants are still green, and I hope with some protection inside the poly tunnel they will survive and get a head start.
We are still harvesting from the tunnel, spinach, Swiss chard, the leeks will soon be ready to harvest,
along with radish and beetroot. 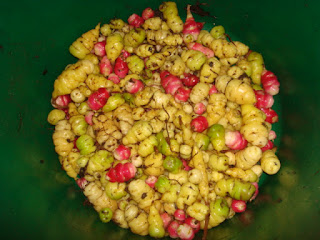 I got the last of the Oca out of the ground this morning, even after all the rain the ground is still fairly workable,
it drains off really fast.
Lots of things to look forward to outside. 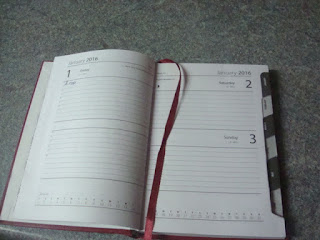 New year new diary, I was after a page a day diary, got one from poundland, to record eggs produced, egg sales, honey sales feed expenses and all other things to do with the small holding. 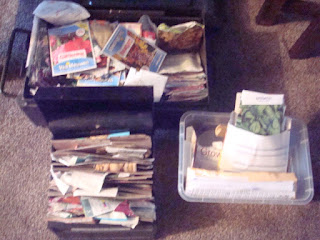 Seeds are waiting to be sorted and a new growing list and plans to be drawn up,
I really don't think I need to buy any seeds this year, I also have a lot of seed saved from our own produce, another few weeks and the first of the seeds will be on the go.

Six weeks and counting sees the goats giving birth, we need the new goat house built before the babies arrive and the goats moved in.
The Chickens have moved into there new home, the Turkey shed has been converted for them
nest boxes installed plenty of space for them to get out of the worst of the weather. Egg laying is on the increase we are up to 5 a day. Having windows in the new chicken house has helped as well.

New livestock is also on the list for this spring, pigs and lambs all for the table.

So that is a summary of what is planned so far.
I am looking forward to it all.