This week I set some Mung Beans to sprout
The beans I bought from Tesco £1.50 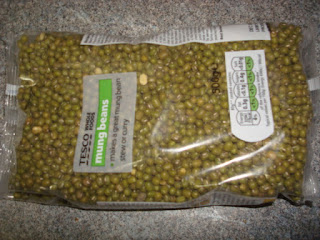 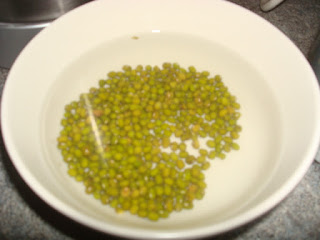 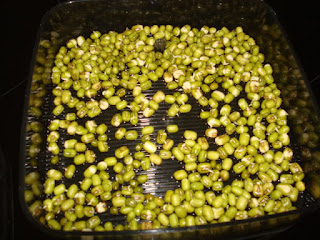 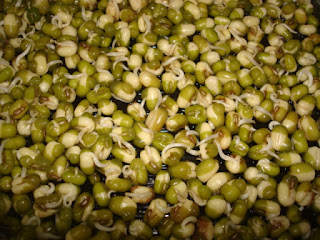 In a few days they will be ready to add to a stir fry, I will start more off and keep a good supply going.
It's so easy to grow your own bean sprouts and cheaper.
Shopping this month was £17.10 last month was £21.70
We are working our way through the freezers and there is now space appearing
We still have plenty of veg from last years harvest and plenty of our own meat
Things are coming on great I the tunnel we are still harvesting spinach baby leeks
Swiss chard kale broccoli radish and beetroot,
I have made a start with some of this years sowings
Peppers chillies were started in January and are under the grow lights
Melon,s germinated the other day 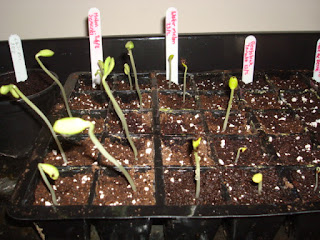 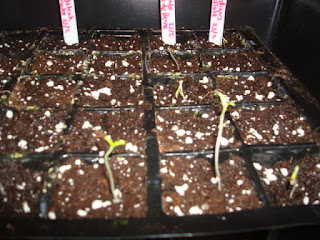 I did notice the potatoes I planted in the poly tunnel last month are now all starting to push there way up.

I have been busy down the cabin too, new post on my craft blog.
Tomorrow we are taking Sol down the beach, its his 9th Birthday so its a trip out to his favourite place,
right must head back we are letting the goats out into the field this afternoon.

Email ThisBlogThis!Share to TwitterShare to FacebookShare to Pinterest
Labels: Seeds

Thanks for all the suggestions regarding BT, the MP was contacted last week, he is looking into it,
The local newspaper has also been contacted this week,
Face book and twitter and other social media sites connected to BT have been posted on,
We have been in touch with the CEO of BT,
also we have been hassling Open Reach who are responsible for the line and doing the work.

Needless to say it is all falling on death ears.
We are also looking into an alternative set up.

Anyway life goes on I will try and blog a couple of times a week,
at the moment I am writing my post in the evening when I have time
then I can pop down to the shop sit outside connect to there Internet and upload.
I can occasionally pick up my e-mails through GPRS on my phone but it very often shows no service,
so please don't think I am ignoring you if your comment doesn't appear for a few days.

Back to the homestead, last week was a hectic week of visitors and not much got done
Lots of cuddling of the baby goats and giving Kara her bottle, 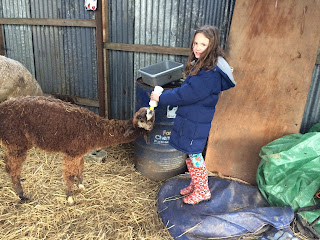 Kara comes looking for a bottle every time she sees us now.
I am trying to wean her on to the Alpaca supplement that she needs,
The supplement is small pellets so I am soaking it overnight to turn it into mush and adding it to her bottle
reducing the powder milk, it smells like weetabix I had to make the hole bigger in teat but she is now getting it.
The supplement provides them with minerals that are essential to them that they cant get through grazing in the UK.

The Goats have now moved into there new house, 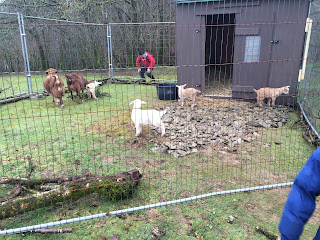 The kids are all doing well
we have a compound area set up outside the house at the moment they are restricted to that space
This week end we will make sure all the perimeter fence of there new field is secure
we are also running some electric fencing around the top.
They can then have access to the whole paddock

I am starting on the next stretch of willow hedging,
I cut back all the willow planted last year and I am using the cuttings for the next stretch of hedging.
After poo picking the Alpacas, its taken up to hedge and is being spread along the fence line in readiness for planting 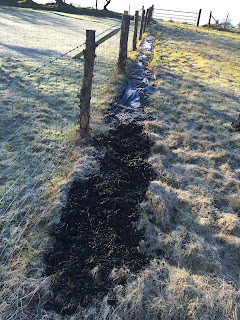 While up there I fill the wheel barrow with mole hills 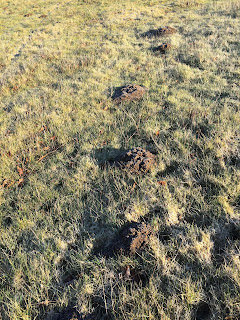 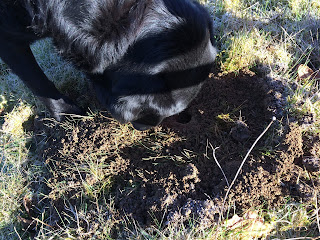 The soil is then taken back and added to the raised beds. 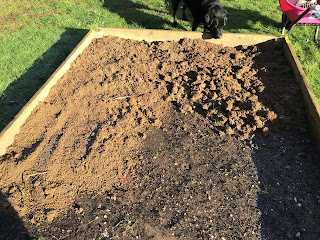 I do the same when I go and collect a barrow of brambles for the goats.
No point in bringing back an empty barrow.

We had a disagreement with the Chimney sweep, he came out start of the month I got him out a month earlier than we had arranged
as I was having an issue with smoke coming from the Rayburn
I don't really like the fella he is one of those who has been everywhere and done everything
anyway I left him with Martin to clean the chimney after he left we lit the Rayburn and for a couple of days it was all OK
then I got up one morning and the kitchen was full of smoke
Got hold of the sweep again and he couldn't return for 5 days
so no heating and hot water
Martin bought a set of brushes and set about clearing a blockage he found 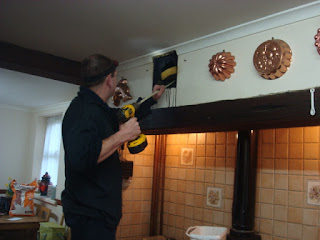 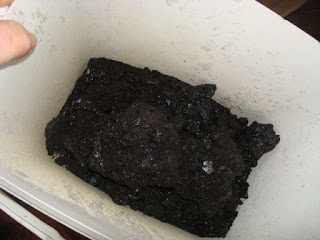 Not even an apology he just shrugged it off
Needless to say he was sent away with his tail between his legs and will not be returning
Martin will now do the chimneys himself, since Martin did the chimney we have not had any problems.

Not having any Internet frees up a lot of time and lots of little jobs are getting done
and lots of books are being read
I will try and put a book page up when I do my next post.
The weather has been lovely this week,
lots of blue sky and sunshine during the day and good frosts at night.

Be back soon with more news. 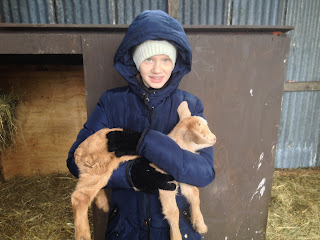 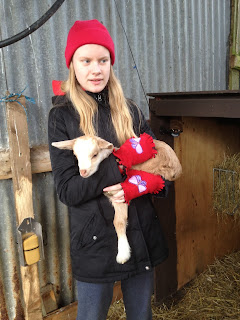 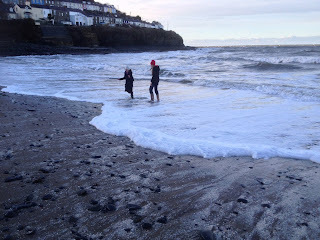 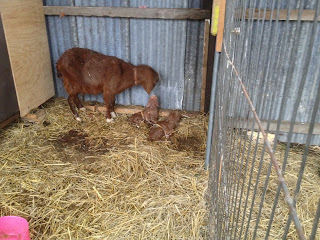 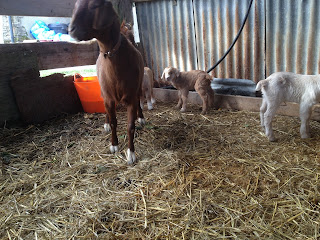 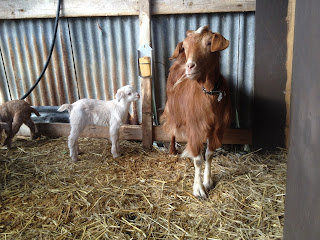 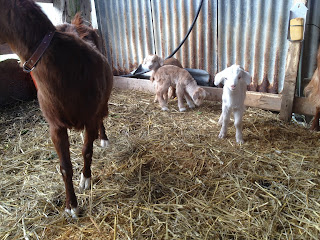 all very bouncy, and love playing king of the castle
the female has been named Helen after Helvelyn in the Lake district.

Hope to be back soon online properly :-)

Thelma had a set of twins today one boy one girl Connie had two boys, Martin will be naming the girl in a few days as she will stay with us, the boys will be going in the freezer, not just yet they need to be a lot bigger.
Update from BT they have upgrade the repairs, new date is 12th of Feb
It is pouring with rain here and blowing a hooly not nice at all.
Will post some photos when I go to a hot spot writing this post from my phone

Just a quick update
Connie had twins early this morning 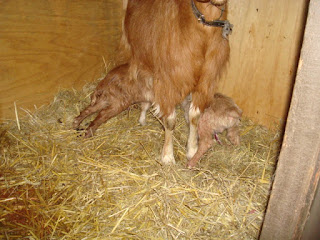 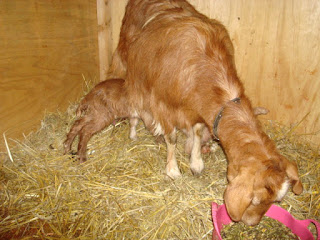 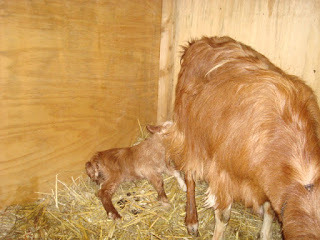 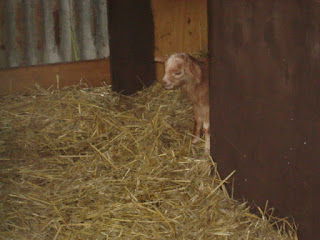 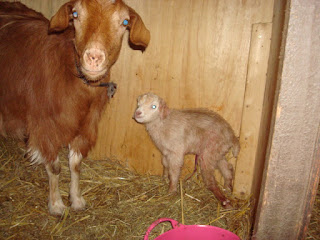 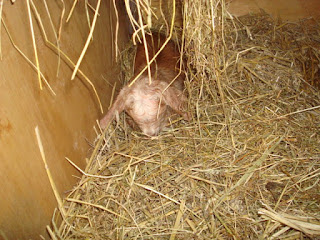 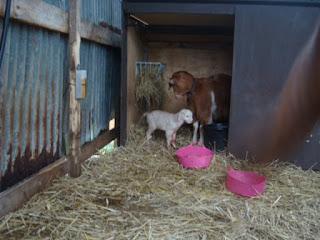 Dont know what they are yet, I have been leaving her to it she is doing fine and the kids have been feeding.
Thelma is very restless I hope that is a sign that she is about to deliver.

just found out I can get a signal outside the shop.
No word from BT.

They said it should be fixed Feb 4th, guess what it isn't fixed
I am sitting down the pub again using there Internet
while eating Scampi and Chips
well it would be rude to come here and just use there Internet,
It saved me cooking something as well.

The Alpacas have improved tenfold, they are still being brought in at night although we haven't anything but the occasional shower for the past week.
Kara is doing well and is still on two bottles a day.
Chickens are all laying well.
Goats still haven't kidded, although Connie didn't seem herself today so perhaps this it the start.

I gave them a good clean out again today and cleaned out the Alpaca area
I have been doing a bit of tidying in the garden as the weather has been fairly mild.
I am so glad we didn't choose N.Wales a terrible wet area and I should think depressing.
Sol and me have had a few long walks fetching greenery for the goats, poor old boy is tired out.

will be back soon take care everyone.