Alpaca Update & May In The Polytunnel

Thank you for all the well wishes for Janine,
It was a worrying day not one I want to repeat
I am happy to say
Janine seems to be O.K she is eating drinking and all bodily functions seem to be working fine,
I think she feels a little weakened and tired after yesterday but otherwise all seems fine.
Here she is after breakfast grazing with the others. 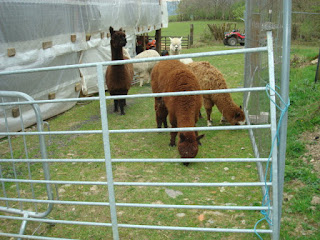 May in the poly tunnel a post I promised last week and never got round to it. 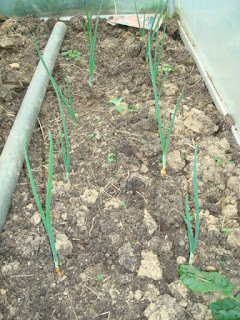 Two short rows of onions coming on a lot faster than the ones that were planted outside at the same time. 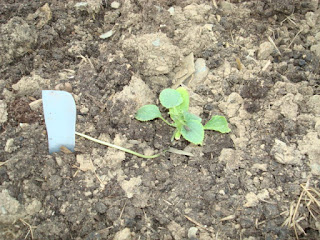 Water Melon's they are growing but slowly 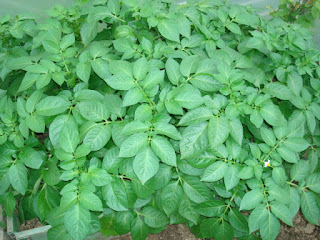 First early potatoes, they started flowering last week and I have been taking off the flowers, soon be harvesting the first potatoes of the year. 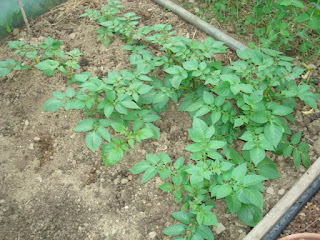 Pink Fir potatoes, all earthed up 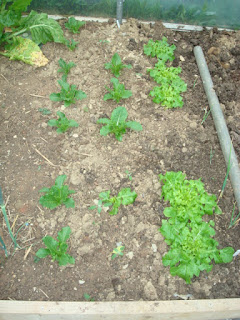 Lettuces, had a few pickings still plenty more to come 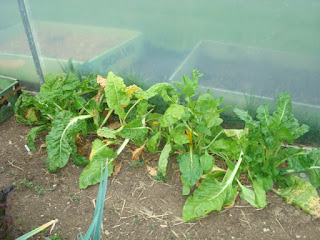 Swiss Chard its starting to look tired but it has been going for a year now, I have sown some new seed, it was good being able to harvest some during winter. 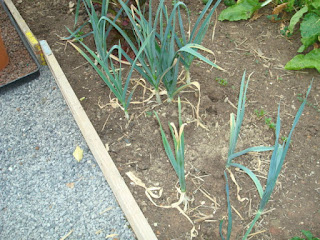 Leeks I have been harvesting in size order, again it was good to have them through winter, once finished the ones out side will be ready to harvest and I have some more young ones on the go that will be planted in the tunnel for winter spring. 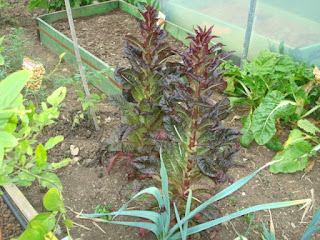 Relic a heritage lettuce, now starting to bolt, plenty of leaves have been used off these. 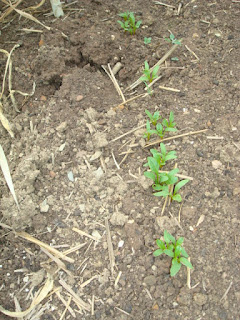 Beetroot, these are a yellow one another heritage variety 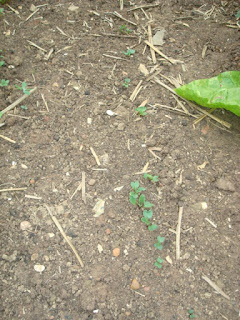 More radish on the go. 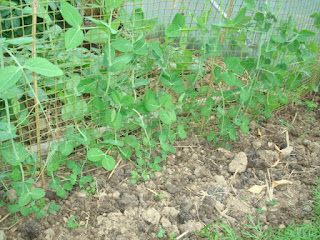 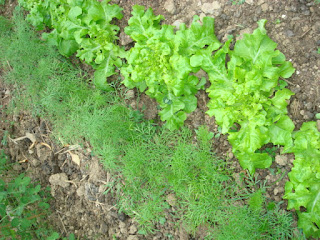 Bulb Fennel and more lettuce the fennel needs thinning out. 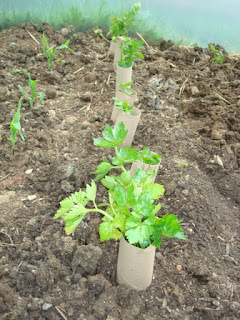 Celery I have cardboard tubes around them as I want the to grow tall and stay white, when they grow too big for these tubes I will tie some cardboard around them. 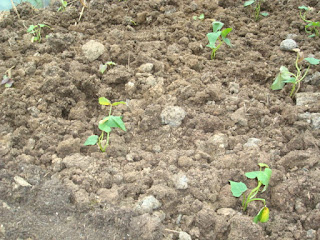 I got the sweet potato slips in yesterday. 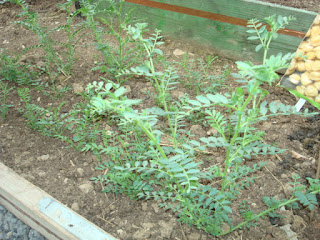 Chickpeas, they are growing into nice strong plants. 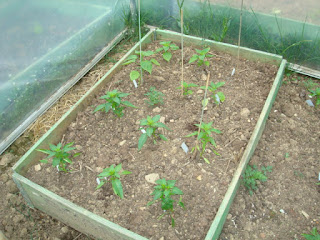 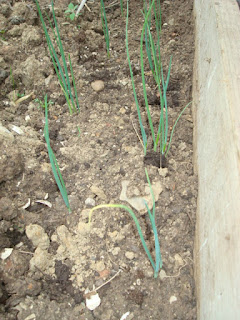 Spring onions wont be long before they are ready for picking. 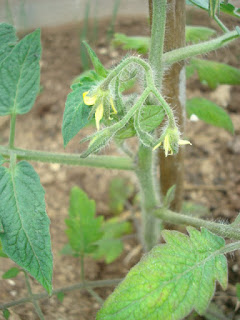 I ended up planting two tomato plants in this tunnel as they were out growing there pots, they are now both flowering. 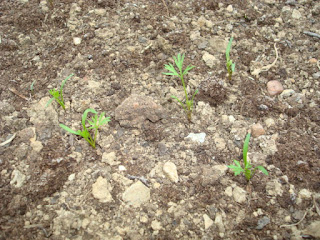 Carrots, this bed is a mixture of odds and ends from seed packets 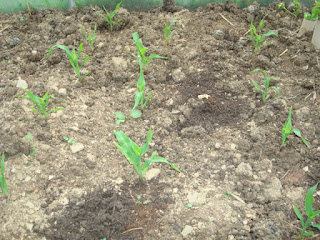 Sweetcorn, I don't know how its going to do in the tunnel,
I might have to help with pollination. 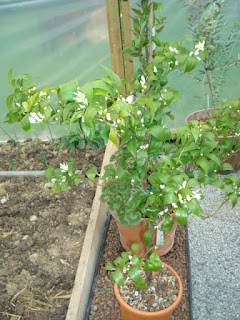 The citrus trees seem to be liking the tunnel environment and are a mass of flowers, 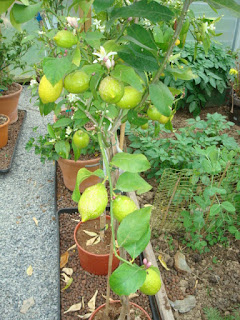 and fruit, just as well as they will be moving into there own space in the next week or so. 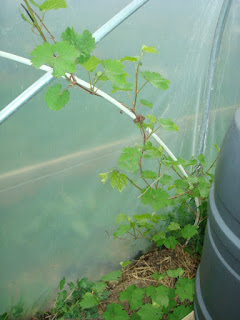 The grape vines are putting on plenty of growth and have flower buds, the one outside is only just breaking into leaf. 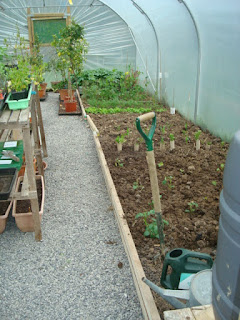 I think the tunnel is now full and planted up for this year
as you can I finished getting all the gravel down that came out of the greenhouse. 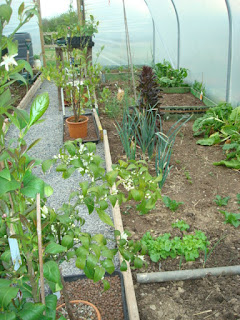 There will be succession sowings of salad catch crops, but nothing else will be planted in this one, Tomatoes and Cucumbers will be in the other one along with the citrus trees and a few other things that prefer a dryish atmosphere, having the two tunnels means I can create different growing conditions in them.
I am looking forward to getting things moved over and having the path clear.

We didn't manage to get the new tunnel covered it was too windy yesterday and today, but all the frame is finished this week weather permitting I want to finish clearing the ground there it will be easier to clear without the cover on it.
We have got plenty  other things done this week end.
Last night we had a lovely steak dinner 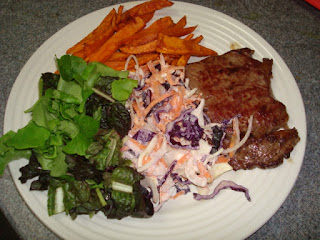 Rib Eye steak with sweet potato fries, home made coleslaw and lettuce from the tunnel
Much needed after the day we had.
I will take you on a tour of the outside growing areas later this week.

Email ThisBlogThis!Share to TwitterShare to FacebookShare to Pinterest
Labels: Polytunnel