In between normal chores yesterday I had things to sort out for Sol
First up was his bed, I took the cover off to wash the other day to discover the inner pad had yet again been torn open and the contents were spilling everywhere,
This happens because he likes to scratch his bed up into a heap
I made another pad this time out of one of his many fleece blankets, 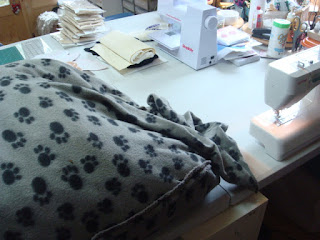 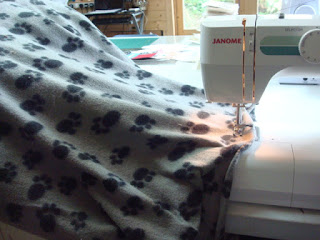 I cleared plenty of space on my work table, the last thing I wanted to do was spill those polystyrene beads all over the place. 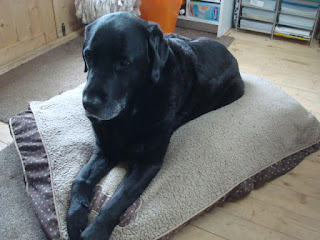 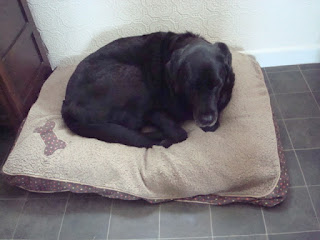 Comfy bed again, all repaired as you can see Sol doesn't look too happy in the photos, he has an ongoing problem with his neck, Vet says its arthritis, when his neck troubles him he cant turn his head to the left, we have anti inflammatory and pain relief to give him, usually after a couple of days pill popping he is fine,
yesterday I gave him the last pill in the packet and phoned to vet to pick up some more, an argument then ensued, our vet is on holiday until the end of the month and the locum was not prepared to prescribed more without a consultation, that would have added another £37 to bill, there wouldn't have been anything visible so x-rays would be needed hundreds of pounds later I would have been given the pills I initial went for,
The info was already on his notes, there was no way I was paying out all that and told them I would go to another vet and would be calling in for his medical notes. A while later they phoned back and said the pills were ready for me to pick up.
I did a bit of research on the internet and found I could get the pills they are a doggie version of Ibuprofen online for half the price and needed to send in a written prescription, when I picked up the pills I told them I will be seeing Simon on his return and will be needing a repeat written prescription.
This neck problem started the day after we got Sol 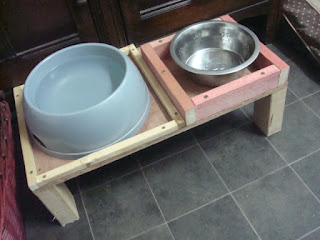 Martin has built him a little table so his bowls are up off the floor and easier for him to access. 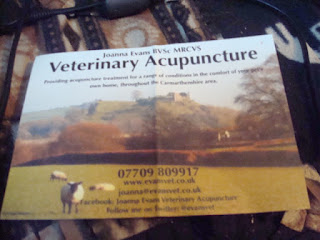 I picked this card up yesterday pinned to the board were I walk him, I have been told good things about this, I am giving them a call and see if they can help Sol with his neck.

We are going to the Bulith Wells show tomorrow as that is the better day weather wise, today will be spent laying slabs in the poly tunnel, we had a big delivery of slabs, sands, ballast and cement arrive the other day, the ballast and cement is for Martin to make a start on his work shop area, must get a move on lots to day and no doubt sore muscles at the end of the day.
Posted by Dawn at 00:47:00