First Of The Season 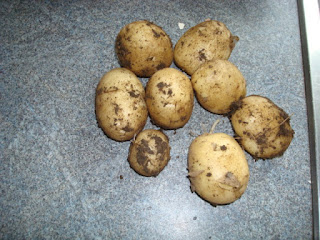 New Potatoes from the poly tunnel
I took up enough just for dinner
They were delicious
Grown from our own potatoes harvested last year
We had them with some gammon and asparagus picked from the garden.
The poly tunnel is doing really well, we are harvesting potatoes, spinach, Swiss chard and lettuce, I am doing lots of succession sowings.
We have another two lots of potatoes in there and I have some outside as well.
Its great not having to buy in veg, it also means we eat seasonal foods, we also look forward to when it is tomato and pepper season rather than buy in the insipid tasting ones they have in supermarkets, also its zero miles.
Speaking of tomatoes it looks like out first trusses have set, so it wont be long before we are picking tomatoes. The peppers are starting to produce flower buds as well.
The idea behind the poly tunnel is to grow veg all year round, I can also bring on crops earlier.
I am having a no dig day today, having sent three days working on poly tunnel number two and when it gets to hot in there to work I have been heading over to the fruit cage weeding and digging there, then when I get too hot in the sun there head over to the house garden and weeding borders there in the shade,
It has been a glorious couple of weeks weather wise.
We did get all the grass cut in the veggie area yesterday, I will take some photos later.
The very weak chick with the stomach problem didn't make it, I wasn't surprised, the broody has two chicks to look after, i was asked if he was a first time mum, yes she is so perhaps that explains her apparent neglect of the hatching's.
I might set some more in the incubator and this time just hatch them all instead of letting brooders do it.