Another hot day,
the Alpacas needed cooling off
with the help of the hose pipe

They enjoyed there shower and after cooling off they went and rolled in the ash from the bonfire, we are waiting for the shearers to get to our area, they will be happier when all that fleece is gone.

I spent the morning digging over one of the beds 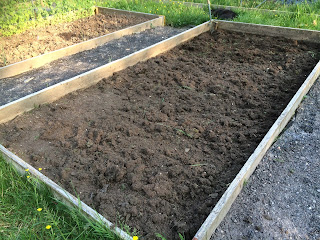 The bed had leeks in it, I have now popped them in the freezer, I need to get some compost from the heap in here and then sow some more peas and pop in some french beans. 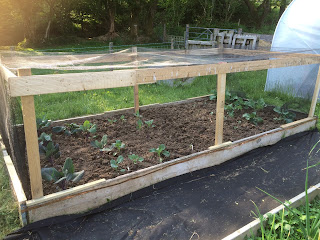 Martin built a frame to go over the brassicas its been covered with netting to keep the cabbage whites off, as all our beds are the same size it can be used on what ever bed I am growing brassicas in and i can lift it off for weeding. 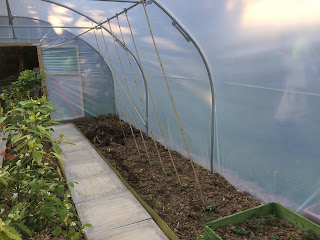 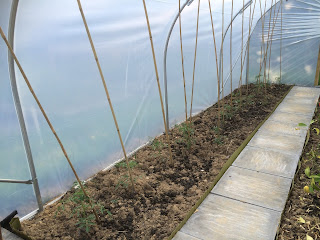 This side is full of tomato plants, last year I tried training them around string but found it a lot of messing around, this year i am going for angled canes, some of the plants are stating to flower, I have nipped out all the side shoots and later this week will start tying them in.
I am growing four variety's this year, a beefsteak, a pink salad and gardeners delight, in the other poly tunnel is  plum tomato for making up sauces and canning, they have already set fruit the side shoots I took side shoots off them last week and set some of the shoots, 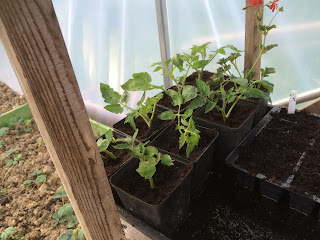 Another 8 plants all rooted and almost ready to plant on.

This will give me 28 plants in total.
I am still sowing short rows of lettuce, beetroot and radish, I am trying to not have gluts to make it easier to deal with.
I will do a proper poly tunnel update later in the week.
The forecast keeps saying we having rain but not a drop has fallen, its still flaming June.
Posted by Dawn at 14:22:00