It was a wet day yesterday, from lunchtime onward it was just heavy drizzle,
In the morning I did get the chicken house all cleaned out and the goat house,
although there was lots of eager helpers with the goat house. 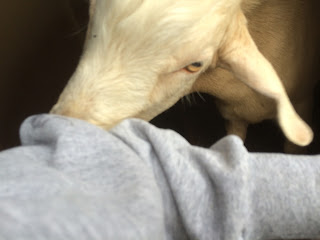 Billy No1 was trying his best to remove my clothes 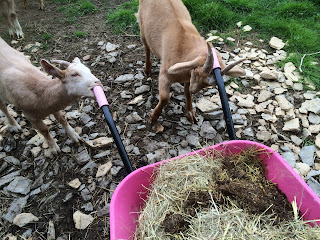 While little Helen and Billy No2 were trying to push the wheelbarrow for me
Eventual I got the job done and remained unscathed
I moved on to the strawberry patch and finally  got the straw down around the plants, they are all newly planted out this spring and were the runners off last years, so late getting started, while doing the straw I removed runners, then the rain came down so I moved into the poly tunnel 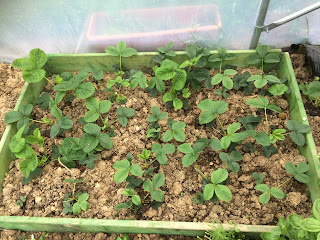 The small bed of strawberries that were left over plants had all there runners removed, next year I will choose runners from plants to propagate on, I haven't bothered putting straw around these, I have had a few pickings of strawberries not vast amounts and in the main bed there is lots of fruit coming on. 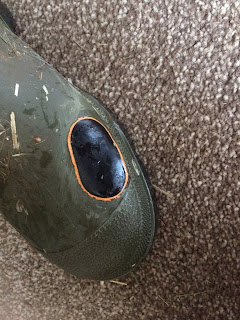 A break for lunch and I got a repair done on my wellie, a small split was giving me a annoying wet spot on my foot. Now I will get a few more months wear from them.
The afternoon the drizzle didn't let up, I was in the poly tunnel again, I have taken up the last of the early early potatoes, 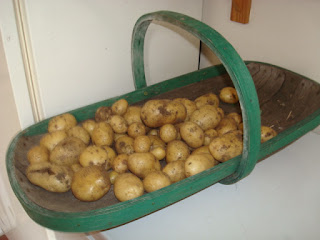 That small bed of potatoes that was planted at the start of the year from some of our own home raised potatoes has been very production, we have been harvesting them for meals ever since ours finished, so we haven't had to buy in potatoes at all, the second bed should be ready to start harvesting as we get to end of these then there is three more succession planted beds of potatoes, at the end of summer I will plant up more for a Christmas harvest.
I also pulled out the peas from the poly tunnel, they have come to there end, again we have had fresh peas for several meals and some have gone in the freezer, the outside peas are now filling there pods and will be ready to start harvesting soon. 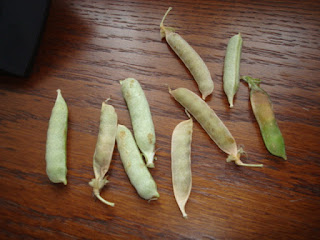 I missed a few pods when I had been picking, these I am leaving to dry out then will sow these in the autumn, there is only a few enough for a short row in the poly tunnel.
My son is here for the week and has been helping out with lots of jobs, today he got the bunk beds up for me 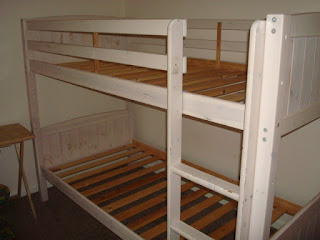 These beds have already done the rounds and provided sleeping areas for two sets of grandchildren, when they were being re-homed I asked for them, now in the front spare room, I will give them a new lick of paint this week, I have ordered some new mattresses, they have given extra sleeping areas for visitors.
Now the Alpacas are sheared and they have been moved to there rotation paddocks the barn is now vacant Martin has been able to make a start on his workshop 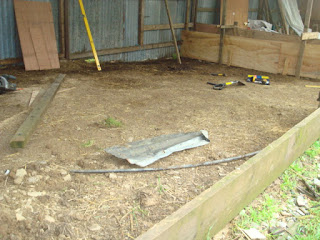 There is a deep area to fill in to make the floor level,
where the shuttering is a wall will be built the next bay will be our log store, once this area is filled with hardcore Martin will get a concrete floor down.
Today should be dry we might even get down to the beach later.
The rest of the week is damp again although we haven't had the rain like they have on the east side of the country.
Hope you all manage to stay dry.