The other morning I finished up my jam making with some Raspberry jam, using the raspberries that I found in the bottom of the freezer. 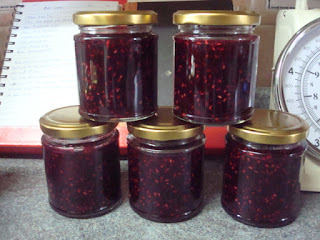 5 jars of yummy jam, Raspberry jam has to be my favorite.
There was a bit of jam left over not enough to fill a jar, 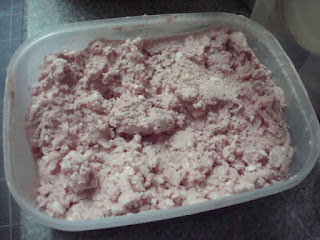 I had already taken out a tub of goats cream from freezer had other plans for it, change of mind I turned it into Raspberry ice cream.
Yesterday was release day for the doves, Martin took the netting off in the morning so they could fly free 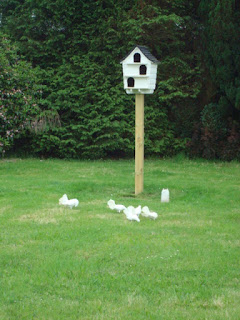 They had a bit of a fly around checking out the trees and buildings around them, then spent most of there time hanging about in the garden, its lovely seeing them fly free.
They are defiantly laying eggs, there is some in the pop holes and yesterday Martin picked one up off the ground 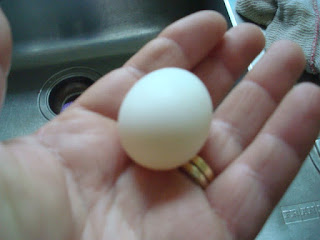 We had a trip out yesterday to the Game Fair, the weather was good, Sol had a great time clearing up any dropped bits of food, he is not fussy the only thing he turned his nose up as was a bit of squished peach.
We watched some of the display's Martin got a few bits he was after and I got a new unusual plant more on that in my next post.
Dinner last night was a quick throw together stir fry 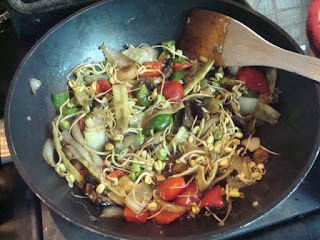 Using veg from last years harvest that was in the freezer and bean sprouts I did during the week, I also added the green chick peas to it, we had it with the burgers I made the other day.
Some-one asked what the green chick peas are like, I tried one raw, best way to describe it is a cross between a pea and green hazelnut, there was a bit of a nutty taste, very tasty.