Yesterday morning when I went to feed and milk the goats, little Helen was not were she should be in the kids paddock, they are separated from there mums at night, not being there means she had got through into the mums paddock and of course her mum will have no milk, this has happened a few times, but when the mums came out with little Helen following I could see Helen was limping and not bearing weight on one of her back legs.
A visual check over did not bring to light any injury, I thought perhaps she pulled a muscle or something like that.
As the day wore on I was checking on her and she wasn't herself, I made a phone call to the vet, who suggested that I bring her in this morning, if she needed an X ray it would be easier at the animal hospital. 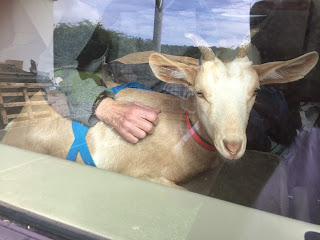 My car is not geared up for transporting animals, so with the help of Senior C from next door we got her in the car and Senior C sat in the back with her keeping her calm and stopping her leaping about the car. 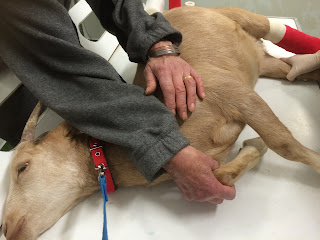 After being checked over by two vets it was decided she had not dislocated anything and it was thought that she had fractured some of the small bones in her hock joint, an x ray wasn't done as she is still growing and the growing plates in her joints would show up as fractures, her joint has been put in a fiber glass cast, a lovely red one to match her collar, she was so well behaved, she wasn't given any anesthetic, at one point she started falling asleep.
Once her cast was done she was given some pain relif and we could get home, she has to return next week to get her cast changed.
Being young she will heal OK.
How did it happen I can only guess she went through the top bars of the gate and caught her leg.
In the meantime I am letting her out with the others during the day then at night I am shutting her in the small goat house away from her boistrious brothers, she gets her own food as the boys were pushing her out and being on three legs she was at a disadvantage.
One broken goat, fingers crossed she is on the mend.