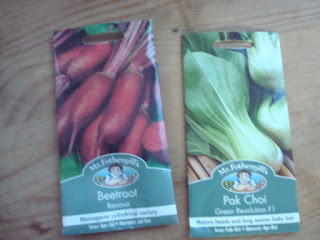 And some Pak Choi, I had used all mine up and want to get some more sown outside and in the poly tunnel 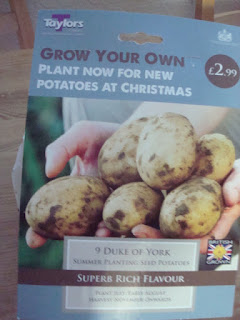 They had just got these in so picked up a pack a different variety to those we have been growing, they will go in the poly tunnel.
This little garden nursery like many have a big box in the parking area filled with trays and pots that they have used, they give them away free. 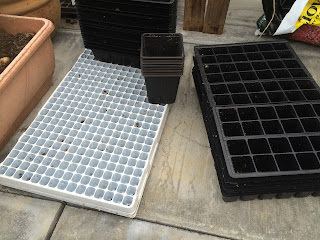 I picked up these trays and a few pots, I have never bought plant pots all the years I have been gardening there are always pots going for free, through social media sites, gardening groups, free-cycle and at the tips and since garden centres and nursery's have been giving away trays in the name of recycling I have never bought trays, they only need a wash then they are ready to go again.
Today I was harvesting things from the poly tunnel
I need to clear space for more sowing's 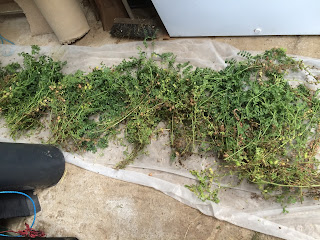 I took up the chick peas, laid them out on some garden fleece 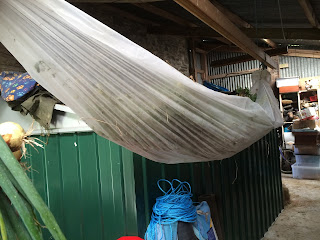 and strung them up in a hammock to let the air circulate around them so they dry off then I can pick out the chick peas, I can give them a shake every time I pass by to help them along. 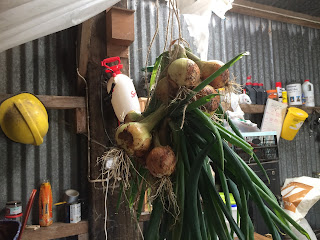 I also took up the small bed of onions from the tunnel, the tops were bent over so they were just about ready to harvest, again they are tied up in the barn to dry off.
They weighed 5lbs in total, all produce is weighed and recorded that way I can work out if we are growing enough and what is producing best. 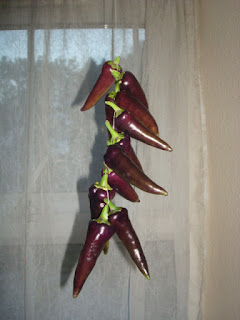 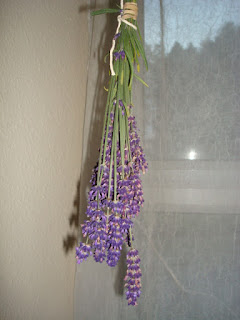 Along with some lavender 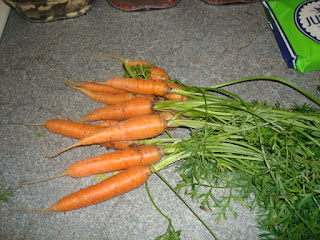 More carrot thinning's this bunch weighed in at 1lb

Tomorrow I will be sowing Beetroot Pak Choi and lentils.
We had a fox attack this evening, my two OAP girls 9 years old and still laying 5 eggs a piece each week a couple of young foxes tore them apart playing, I am now in wait for the sods and will string them up.

Diary
Tuesday October 12th 1982
Went to Llanybidder in search of Eva brown to no avail, bought loaf of bread, took different route home through country lanes, really very beautiful.
Called in at show rooms for chain saws, assistant really knows his stuff, bought a logging saw in Carmarthen and can of 20-50 oil for car, pick up etc.
Had a cup of coffee and round animal market (sheep)
Telephone man unable to come, van broke down.
John let down on moving of his animals by Ashton Reed.
Posted by Dawn at 15:36:00