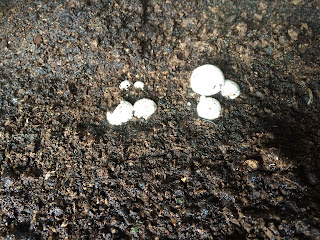 Mushrooms,
Back in June I set up the mushroom bed details HERE
It looks like I might have mushrooms on the menu this week end.
Today has been a smelly day and I was glad to get into the shower and cleaned up this evening.
I was cleaning out the Billy goat house, they have started dousing themselves in goat aftershave, (urine) and while I was cleaning there house they insisted on rubbing themselves up me passing on there aroma, the reason for all this behavior Connie has come into season or Connie has come into season because of there behavior.
She has been very vocal for 24 hours lots of tail wagging and insists on teasing the boys through the fence, it has now passed and she will come into season again in about three weeks and will continue like that until she is in kid, I don't intend to put her to a Billy until the autumn. I am keeping a note of her cycle and I have a Billy lined up, just waiting for Thelma and Helen to start there cycles now.
Other news on the animal front
The little chicks are now integrating during the day with the rest of the flock 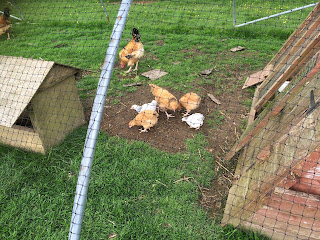 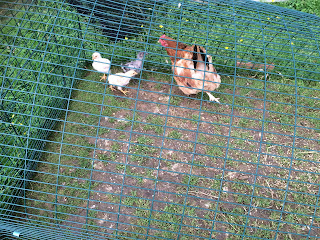 Mamma hen and her little chicks are doing well, once the others are settled into the flock I will start integrating this little family.
There is a definite cockerel in the bath of little chicks and I think there is one in this little group, two more roast chicken dinners lined up.
I have been fixing up and changing hay racks in the goats houses, I needed a small one in Helen's house and the boys needed a proper rack.Which also go me looking into organising some hay,  before winter comes. I have also been shifting things around putting them were they belong, the day just flew by.
Diary
Thursday 14th October 1982
Up at 7-45am, breakfast, cow milked, raining, went to Llanybydder to see Eva Brown at Market. Walked around lambs for sale, nothing spectacular. From there to Cwmann to see where Eva lives. Then on to Lampter, nice little town did some food shopping £16.
On the way home took turning to Gwernoggle very pretty route and village. Home had something to eat, unloaded Ifore William trailer, then police came for statement from John about Betty's accident, he left about 9-30pm. John to phone Elgen Jones about sheep buying.