WARNING
Some may find this post distasteful.
Yesterday while working in the veg garden, I heard a commotion in the chicken area,
A Buzzard had swooped down and was attacking one of the chickens

I have managed to upload cctv footage of the attack on to facebook but cant get it load here.

The buzzard didnt manage to get away with the young chicken it misjudged and crashed into the chicken house and dropped the bird, which as I got over to it was taking its last breath. 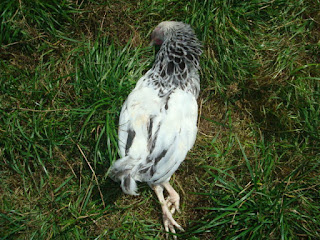 I was angry in fact I had a bit of rant well more than a rant,
The young chicken didnt die in vain,
I used it to bait the fox trap
and this morning 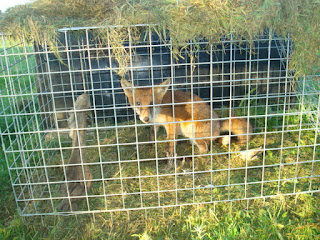 Yep I have me a fox a young one, proberbly one of the young ones that had my OAP's the other week.
Now awaiting for some one to come and dispatch it.
Yes it may seem unfair being such a young fox, but it is the way things go, it cant be relocated and cause some-one else problems.
Young foxes grow up and breed more young foxes, we already have a population explosion of foxes.

Email ThisBlogThis!Share to TwitterShare to FacebookShare to Pinterest
Labels: Vermin