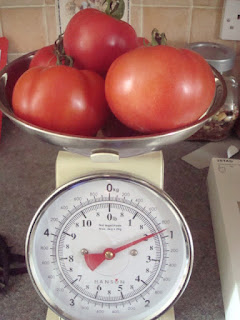 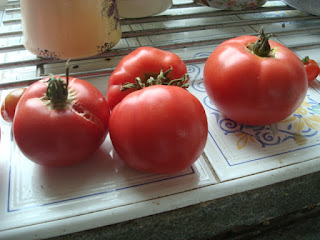 Mainly the big beefeater ones at long last.
I had to get something done with them, the small tomatoes we happily eat in salads or Martin just eats on the go.
I had a couple of pound of plum tomatoes as well that I managed to harvest before I lost them to blight.
I want to show you how easy it is to bottle tomatoes safely without any fancy equipment. 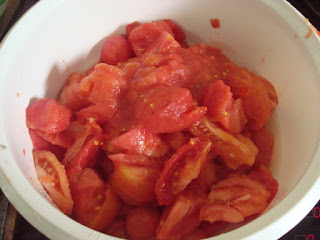 Firstly the tomatoes have to be skinned, dropped the tomatoes into boiling water when the skin splits drop them into cold water the skin slips off easily, I chopped up the tomatoes because they were big ones. 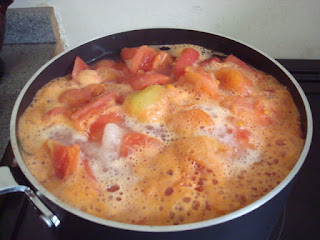 This is the hot pack method, pop the tomatoes into a saucepan and cover with boiling water, simmer for 5 mins
have your jars sterilised and lids
spoon your tomatoes into the jars leaving a head space of at least half an inch, add quarter a teaspoon of citric acid or 1tbsp of lemon juice to each jar, 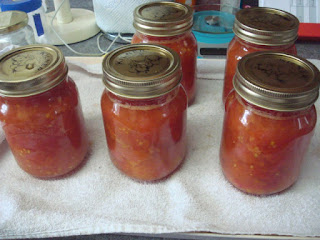 wipe the rim and put on the lids 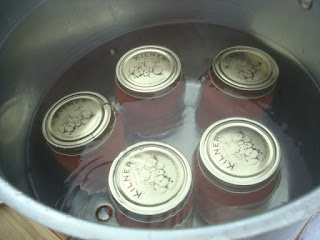 have a deep pan of boiling water ready, pop the jars into the pan,
make sure they are covered with water
Boil for 40 mins, keep an eye on the water level. 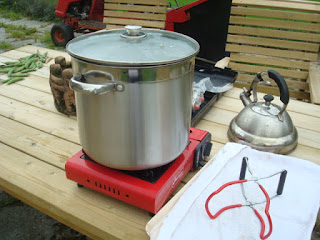 as it was a hot day, I did mine outside on my portable stove, these little gas stoves are brilliant. 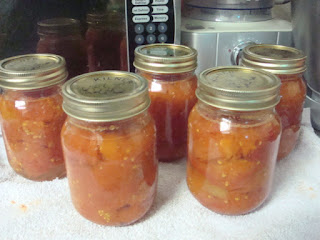 once the tomatoes are done lift them out, stand the hot jars on a tea towel and leave to cool, as the cool the lids pull in creating a vacuum seal,
that's all there is to it,
they will keep for years providing the seal isn't broken,
These tomatoes are the same as the ones you get in a tin.
Next I have to get some french beans canned they are coming along thick and fast now 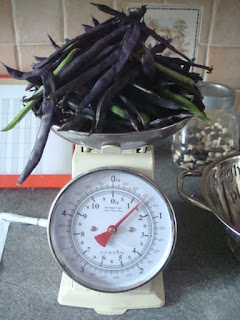 Every few days I am picking this amount, the purple ones are more productive than the green, its a shame they turn green when you cook them.
This batch I popped into the freezer 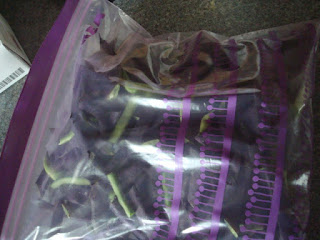 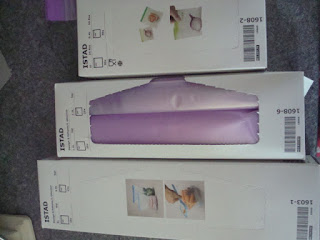 I like the Ikea zip lock bags, you get two different sizes in each box 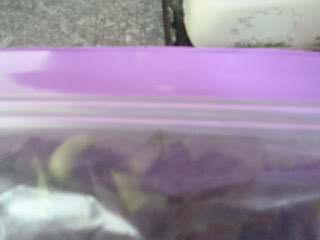 and they have a double zip seal, they are suitable for freezing, can be washed and re-used many times, and they are an excellent price.
Freezing is OK but I don't want to fill the freezer with veg harvests knowing we need the space for up and coming meat.
The next lot of beans I will be canning.
Diary
October 25th Monday 1982
Washed Calendines bottom, had breakfast.
Took pick up to have wiring sorted out, dead short to brakes?
keeps blowing fuses for horn, lights washers etc.
Wrote to mother about Molly picking up Prince.
Douglas had exhaust seen to.
Bill for pick up £33.43, Molly and Douglas left about 4-30pm.
Collected headboards for the beds.
Washed floors, swept through and brushed mats, Did ironing and washing, got tea.
John shifted more machinery from top field.
Coates phoned wanting £1.35 per bale for hay not £1 as originally agreed.