A Touch Of Sadness

Last week one of the Doves went missing, they always hang around together, I thought that a bird of prey of which we have lots around had taken it.
Last night I could hear a noise in the flue of of the wood burner
Martin took off the cover of the soot box 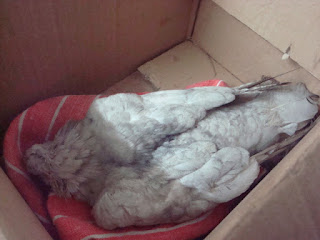 Inside was the missing Dove, it must have fallen down the chimney 5 days ago
It was still alive only just, it took a little sip of water but it was to little too late and it passed away.
We are going to put a cage on top of the chimney to prevent any further accidents.
On a happy note
Sol had a play date the other date 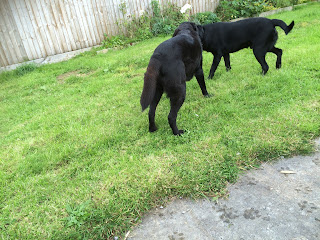 Sol and Fizzle often meet up on there walks 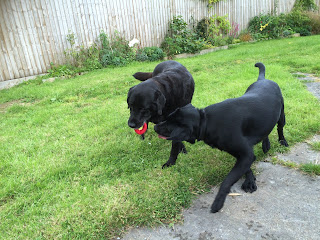 and have got to know each other, Fizzle is a young dog and very bouncy compared to Sol who is an old timer, they had a great time playing tag, although Sol became very possessive over his ball and tormented Fizzle with it.
Yesterday the rains came which was a shame as it was carnival day in the village 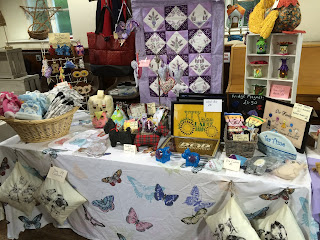 I had my little market stall,
The rain didn't stop the villagers coming out and enjoying the,
event.
It was also slaughter day for the two Billies yesterday, today Martin has to get them butchered, a long day for him, I will be in the kitchen baking and when needed I will armed with bags and labels to do the packaging.
Diary
Saturday October 30th 1982
Fixed power line to caravan, Fixed light on the front porch, went to Carmarthen shopping bought groceries, 2 vests 2 pairs of pants and 2 pairs of socks for John, John and Douglas went to St Clear and bought Kew power washer £700, came home Richard and Cheryl arrived 7 mins past 8pm, had supper.
Bula had disappeared found her in bedroom under chest of drawers.
John bought hose pipe and Douglas bought tough black wheelbarrow.