I have had my friend to stay this week and took a complete break from the computer, we had a great time and the weather was glorious.
After she departed yesterday lunchtime I had chores to catch up, I only did the basics while she was here, first up was cleaning out the chicken house, then on to the goat houses, all clean again.
Thelma goat can be a real madam to milk some mornings, things needed to be taken in hand and yesterday afternoon I built her a milking stall. 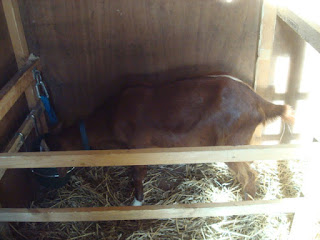 Now she can be milked in a confined area, no more leaping about when she is throwing a tantrum, I tried it this morning and I need to do a few alterations but otherwise it worked fine.
Thelma can be a real nightmare and the saying stubborn  as a goat describes her perfectly 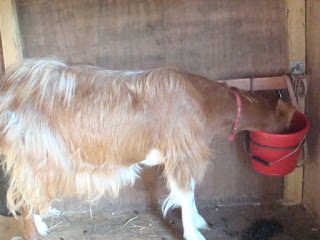 Unlike her sister Connie who will stand without being fastened up, let you do what you want, she is so friendly and calm, they really are like chalk and cheese. 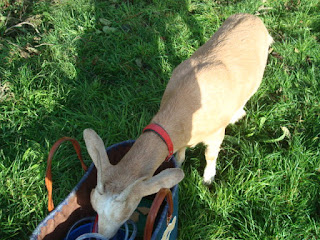 Helen who is Thelma's daughter I really hope has her aunties temperament rather than her mum's,
Now the billy's have gone Helen has been moved into the paddock next door to wean her completely from her mum, 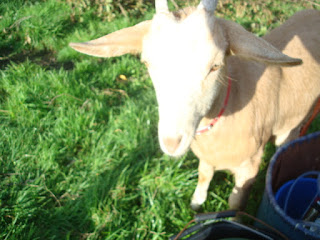 She is not happy about it all, we had four days of her bleating pitifully she sounded like a baby crying and went off her food, yesterday she seems to have turned a corner and ate her supper last night and is a lot quieter this morning, she is in the paddock next to mum and aunt and spends her time lying by the boundary fence to be close, but she really needs to be weaned, 7 months old she no longer needs feeds off mum, we also need to start building up Thelma ready to be put to the billy again.
Speaking of which I am starting to wonder if Connie got caught through the fence by one of the billy's, she came in to season and should have come again 3 weeks later but no season she is due again next week if she doesn't then it looks like we are looking at New Year kids not ideal.
Posted by Dawn at 01:21:00