We all have one and this is mine, what is yours? 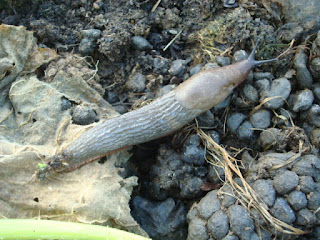 Big, small, fat, thin, black, brown or beige horrible destructive slimy creatures, I despise them all.
I don't like using slug pellets if I have to resort to them then I use an organic one 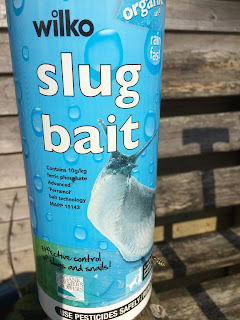 It is effective to a certain extent, I also do put down slug traps with some cheap beer in, I have tried in the past nematodes with fairly good results but they are an expensive way of treating slugs, for one poly tunnel to use nematodes effectively it would cost approx £70, with two tunnels and a fruit cage and the outside beds it would cost over £500 each year, now who can afford to throw that sort of money at growing fruit and veg it makes it very expensive food.
Copper tape around pots is OK but you do have to keep cleaning it for it to work.
So what is a girl to do 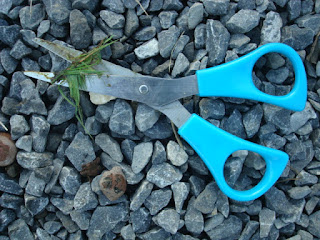 Scissors are my most used tool in the fight against slugs, see a slug cut it in half, these scissors live in my pocket, they cost nothing to use and very effective when used on a daily basis, over a few weeks there is a reduction in slime producers, some days I have to really hunt for them, some people put salt on slugs that is alright on hard standing areas but you don't want to be putting salt on the soil in your growing areas, some people pick up slugs and throw them over the fence, they only come back and its not really nice to throw them into your neighbours plot, you might get twice as many thrown back, cut them in half, birds hedgehogs and other wildlife come and feast on them.
Now for something pretty 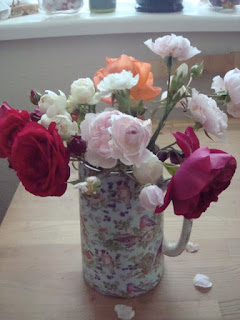 picked a few of the late roses yesterday to bring indoors 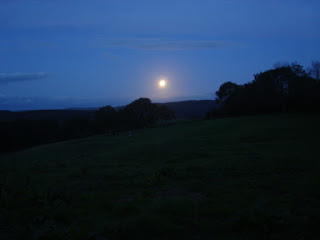 Last night there was a stunning harvest moon, I took this photo from the back garden.

Diary
November 3rd 1982
Drenched another 36 ewes with fluke and worm, trimmed feet and marked with S, put them up with hired blue faced ram, (68 in all)
Drenched 10 from Dorset, trimmed feet and marked with S, Blue Boy fell ill in all the attention except marking with S, took him to vets at Llandysul, gave him terranyain and poretrovite to be treated with antibiotic for another two days.
Collecting ram from Mr Little tomorrow.
Man came from electricity, appalled at wiring, here for 21/2 hours.
N.F.U. dinner dance £7.50 each.
Posted by Dawn at 01:00:00

Email ThisBlogThis!Share to TwitterShare to FacebookShare to Pinterest
Labels: Pesticides