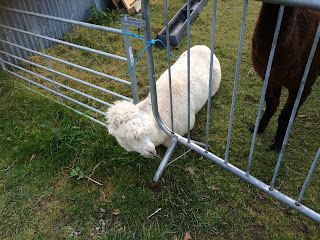 She must have gone under the gate to eat the grass shuffled forward to reach some nice juicy bit and found she couldn't get out again, when they stand the get there back legs up first then the front but of course she couldn't, 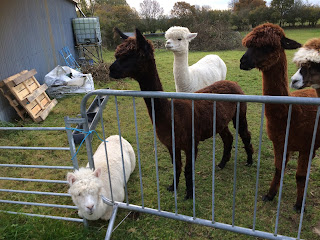 All the others stood around her, I think they were all laughing at her predicament, I had to undo the gate, lift it up to free her, not even a thank you.
Its because of things like this I could never go away and leave the livestock without some-one being here to check on them.
Imagine if we had gone away for a week end and she was stuck there for several days. 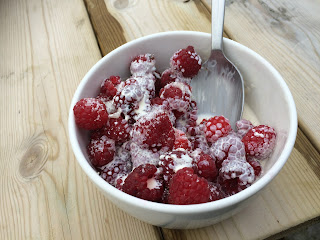 Breakfast fresh raspberries and cream, they are still coming on thick and fast, I have loads in the freezer and every other day there is another bowl full to eat.

Sol was down the vets today for his booster and health check, he passed with flying colours, his heart is good, gums and eyes are good and he has lost a total of 4kg in the past year he is nice and trim shiny coat and is in good shape for an OAP. 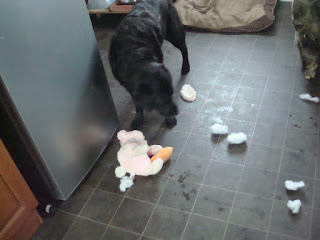 Although at times he behaves like a puppy, tearing up his toys 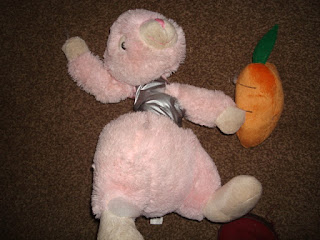 Poor bunny Martin had to do a bit of surgery on it with gaff tape.

Diary
Wednesday 24th November 1982
Letter from mother, Sunny calved at mid day, FERN. John went to get 16 sheets galvanised at 55p per foot, then John spent the afternoon until 7pm on paperwork for solicitor.
Mother phoned to say her farther and Janet coming for week end.
I washed my hair, made a sponge.
Bell's rep called while John was away, calling again.
Posted by Dawn at 14:04:00