Yesterday we went to pick up Merlin 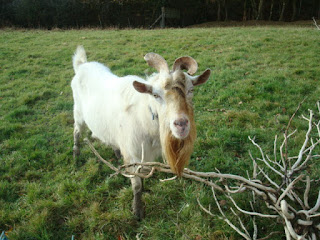 What a handsome fella, 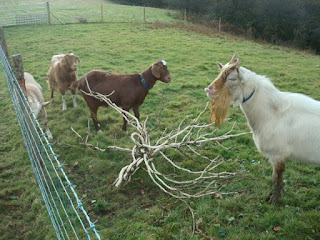 He is here on loan a bit of a blind date for the girls, see those lips curl he starting wooing before introductions were made 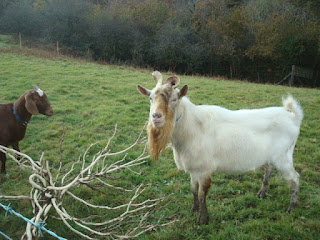 And that long beard is suppose to be white, Billy's urinate on there faces, well they also urinate in there mouths and then spray it over themselves, makes the smelly and irresistible to girls, smelly he is there is no doubt about that.
Thelma was interested straight away, Connie was just giving him a wide berth, we still don't know if she is in kid although her girth is getting wider, we should know by the end of this month, if she is she is due 22nd of December.
Merlin is staying for 4-5 weeks, he is also up for sale so who know he might become a permanent resident. 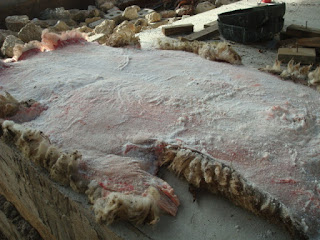 The last two lambs went to slaughter, I started processing the fleeces yesterday, first stage is the salting.
Martin is butchering today. 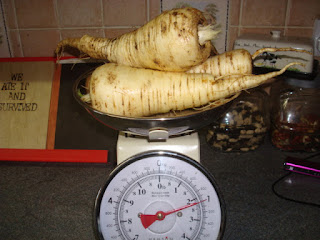 Parsnips were on the dinner plate last night, they are a lovely bunch and a good size, I also added some Jerusalem Artichokes and some Oca to the roasting pan, now the frost is knocking everything back its time to add them to the menu.
Diary
Saturday 27th November 1982
John put Magic with Lucky and Misty with Sunny suckle, we also had some milk for ourselves. All walked out and checked the sheep, went to Carmarthen did some shopping, had coffee,
very misty and cold in town, home late afternoon.
John put calves in again to suckle, had tea, did collis and sprouts for the freezer, bought some granary flour and made two loaves.